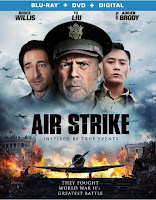 Live by the pointless cameo, die by the pointless cameo. Even Chinese audiences found Fan Bingbing’s brief appearance in Iron Man 3 completely inconsequential and meaningless, but it was sufficient to grant the film “co-pro” status. Alas, her blink-and-you-missed it portrayal of a heroic school teacher in this multinational WWII drama became grist for scandal when she allegedly under-reported her salary for tax purposes. That is something we can easily forgive here in the West, but the Chinese state media has focused its government-backed wrath on her. Perhaps this is partly payback for the incisive social criticism of I am Not Madame Bovary? Regardless, the Chinese release was duly canceled, but it still dive-bombed in and out of American theaters. Mostly just an exercise in anti-Japanese bloody-shirt-waving, Xiao Feng’s Air Strike (a.k.a. The Bombing, a.k.a. Unbreakable Spirit) releases today on DVD (trailer here).

The Chinese Air Force is outnumbered and outgunned by the better trained Japanese squadrons, but pilots like Cheng Ting and An Minxun still feel honor bound to protect Chongqing as best they can. Nevertheless, grizzled Col. Jack Johnson cautions them to take the better part of valor and not fruitlessly surrender their lives. In fact, the Allies are sending some key contributions to the Chinese war effort: a shiny new American fighter plane and a vital British decoding machine.

Former pilot Xue Gangtou (technically on medical leave) accepts a clandestine mission to escort the decoder machine, but he does not know what his cargo really is—even though it is not very secret. The Japanese definitely know what he has and they are determined to stop him. Nevertheless, he still manages to pick up an agricultural professor and his genetically-selected pigs, about a dozen sad-eyes orphans and their protector Ding Lian, as well as a driver/mechanic, who is most likely a Japanese agent.

Xiao certainly strafes the heck out of Chongqing’s civilian population, targeting schools, hospitals, and churches for destruction. The Imperial Japanese are so relentless, they sometimes even bomb military targets. There is some serious carnage here, which might reflect the influence of Mel Gibson, who has some kind of “creative” consulting producer credit on the film.

Granted, this was a total paycheck gig for Bruce Willis, but it is still fun to watch him swagger and bark orders as Col. Johnson. Unfortunately, the Chinese characters are so conspicuously and distractingly dubbed into the Queen’s English, it largely obscures the work of the big-name cast. (Arguably, the voice-overs are almost as obviously fake as the cut-rate CGI effects.) Still, Liu Ye is rather steely as Xue, while Ma Su is suitably mothering as Ding Lian.

After appearing in a small but not completely trivial role in Back to 1942, Adrien Brody returned to China to play a noble Western doctor in Air Strike, whose primary function is to bemoan Japanese brutality, like a weeping Cassandra. However, Rumer Willis has even less screen time as a British doctor who missed her boat, yet she receives prominent billing, as if there is an army of Rumer Willis fans out there. The great Simon Yam also glides through, for about five seconds, as the Chinese Ai Defense Commander.

Yes, the Imperial Japanese military was absolutely brutal during the invasion of China, but that was over seventy years ago. It is worth noting the Japanese constitution legally renounces war and the formation of a standing military for offensive purposes, whereas the Chinese Navy is currently busy bullying Filipino fishermen in the South China Sea. A lot of these anti-Japanese propaganda films really protest too much. Frankly, the best reason to watch Air Strike is to snark at its behind-the-scenes implosions. Not Recommended, Air Strike releases today on DVD and BluRay.
Posted by J.B. at 6:00 AM