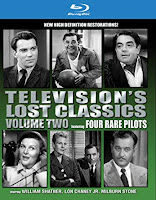 Casting is everything. These failed or drastically revamped pilots prove it. Here’s a trivia question for you. What role was played by William Bendix, Jackie Gleason, and Lon Chaney, Jr.? The answer is Chester A. Riley from the Life of Riley radio, film, and TV series. Chaney Jr. played well meaning Riley in the pilot, but Gleason took over for the initial series run. Chaney’s Life of Riley is one of four curios included in Television’s Lost Classics Vol. 2: Rare Pilots, which is now available on DVD.

The program starts with the nearly unwatchable The Case of the Sure Thing. Presumably, this was conceived as a Dragnet for the New York Bunco Squad, but it makes it look like NYPD fraud detectives sat around all day shilling for Philip Morris cigarettes. In between sales pitches, some poor sap gets fleeced by a horse racing scam. Skip to the next one.

So what role was played by Frank Sinatra (on radio), Art Carney, and racing jockey Billy Pearson? Detective Donald Lam, part of the Cool and Lam duo featured in 30 novels churned by Perry Mason creator Erle Stanley Gardner under the pseudonym A.A. Fair. Wiry Pearson actually has decent screen presence and plenty of nervous energy for the pesky P.I. His boss, the somewhat matronly Bertha Cool seems like a bit of a stereotype today, but the notion that a middle-aged woman could run a detective agency was arguably rather progressive for 1958.

It also has a nice noir look, thanks to director Jacques Tourneur, who is fondly remembered for helming the classic Val Lewton-produced horror movies, Cat People and I Walked with a Zombie. Erle Stanley himself even filmed an intro to the series, so it is odd it never really had a chance.

Chaney Jr. sounds like a highly questionable fit for Life of Riley, but in all fairness, his comedic timing was not bad. The humor itself just seems hopelessly dated, but there is something nostalgic about the show’s blue-collar family values. It is definitely a curiosity, but Chaney fans will enjoy seeing range Junior Chaney rarely had the chance to show.

Lionel Stander, Lee Horsley, Timothy Hutton, and William Shatner? They were Nero Wolfe’s leg-man, Archie Goodwin. Reportedly, the 1959 pilot was a victim of its own success, considered too good for its half-hour format by network executives. Shatner flashes some of that James T. Kirk charm and plays off Broadway actor Kurt Kasznar’s Nero Wolfe quite adroitly. Both actors look like they were enjoying their sparring sessions. The mystery is wrapped up in a rather perfunctory manner (those execs were sort of right), but it is still a shame their Nero Wolfe was not picked up for a full series run. It even featured a theme composed by Alex North, so plenty of talent went into it.

As a bonus feature, Lost Classics also includes a blooper reel cobbled together for a CBS affiliate meeting, hosted by James Arness. It is somewhat more amusing than a lot of similar compilations, largely because of the vintage shows it was culled from (Gunsmoke, Have Gun Will Travel, and The Twilight Zone), but hardly essential viewing.

This disk is admittedly a novelty release. Still, we can see the potential of Nero Wolfe and Cool and Lam, so it is rather a shame that the never found a spot on the network schedule. Indeed, it was a different era, when there were only three episodic content buyers. A modestly interesting diversion, Television’s Lost Classics: Pilots is now available on DVD and BluRay.
Posted by J.B. at 6:00 AM