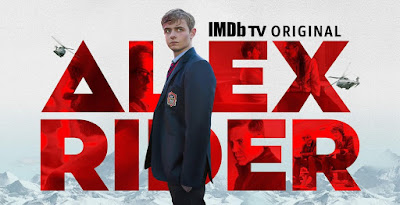 He is a lot like 003½, the hero of a fondly remembered licensed 1960s YA ancillary novel, by the name of James Bond Jr,, who was actually the iconic spy’s nephew, rather than his son. Such is also the case for master Rider, who was unaware his Uncle Ian was not really a banker, until he was murdered in the line of duty. The resourceful teen continues the family business in Alex Rider, Guy Burt’s 8-episode series adaptation of Anthony Horowitz’s YA novels, which premieres tomorrow on IMDb’s streaming app.

Alex Rider is still shy when it comes to girls, but he has self-taught himself capery skills, like lock-picking. After the tragic backstory death of Rider’s parents, his stern but loving uncle looked after him, with the help of housekeeper-surrogate auntie Jack Starbright. When Uncle Ian is murdered by the shadowy mystery villain, Rider sees through the agency’s bogus cover story. However, old school spymaster Alan Blunt is not upset when Rider crashes their secret headquarters. Instead, he recruits Rider for a special assignment.

Evidently, Uncle Ian was killed because he started asking questions bout Point Blanc, a highly elite and remotely isolated prep school that specializes in the troubled offspring of industry titans. Obviously, only a teenaged plant could infiltrate the school, so Blunt arranges a cover from a British food magnate, who already has a tabloid fodder daughter. When Rider arrives, he finds some of his classmates are hip and punky, but others are suspiciously Stepfordish.

Although the series is based on a series of teen novels, Alex Rider should not be too cute or too mild for most adult espionage genre fans. Burt combines elements of the first two books in ways that make sense and should satisfy the pre-existing base of readers. Directors Andreas Prochaska (who helmed Dark Valley and the Das Boot series) and Christopher Smith keep things snappy. Plus, the show sports a wildly cool opening credit sequence (featuring Samm Henshaw’s “The World is Mine”).

Otto Farrant is suitably athletic as Rider, but frankly, the young bland hero is the series’ least interesting character. Veteran character actor Stephen Dillane is great fun to watch (and looks like he is having a blast himself) as the manipulative and dismissive Blunt. Vicky McClure is coolly reassuring as Rider’s handler, Mrs. Jones, while Marli Siu is charismatically neurotic as Kyra, Rider’s potential love interest at Point Blanc. Perhaps most importantly, Haluk Bilginer (Dr. Loomis’s disappointing protégé in Halloween 2018) and Ana Ularu are colorfully villainous as the Point Blanc headmaster, Dr. Greif, and his enforcer, Eva Stellenbosh.

All of season one’s plot points will be familiar to anyone who has seen their share of spy shows, but Burt stitches them together in a slick, grabby package. It is a lot of fun, which is what’s most important. Recommended as streaming comfort food, Alex Rider starts streaming tomorrow (11/13) on the IMDb app.
Posted by J.B. at 6:00 AM