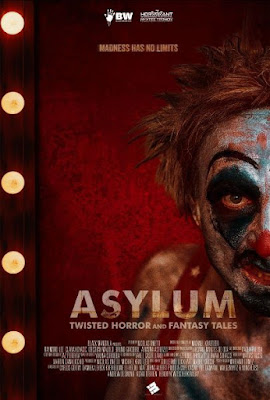 You have to give Nicolas Onetti (one half of the Onetti Brothers) and his producing partners credit for being good delegators (somewhat unusually in genre cinema). As they did with A Night of Horror: Nightmare Radio, they took another batch of short films that already had festival cred and shoehorned them into an anthology. There is no real theme encompassing their latest feature collection either, which is why the subtitle is even broader. However, you can still be assured there will be plenty of nightmarish mayhem in Asylum: Twisted Horror and Fantasy Tales, which releases today on VOD.

Brandon will be our evil clown stand-up-comic-from-Hell master of ceremonies for this evening’s entertainment, from an asylum where the inmates are apparently in charge and putting on a show. Supposedly, each tale relates somehow to his slowly revealed backstory, but do not beat yourself up if you can’t see the connections.

It is a bit ironic the “tales” kick off with Damien LeVeck’s The Cleansing Hour, since it has already been fixed-up to a full feature in its own right. Regardless, even though the concept of a phony exorcism web-series that suddenly finds itself dealing with a genuine demonic possession might not be so original anymore, LeVeck’s execution is tight and brisk, while his game cast keeps things snappy and sharp. It is followed by Kheireddine El-Helou’s slasher short, Drudge, which is certainly intense, but never offers any new twists or spins on the familiar material.

Mat Johns’ Father’s Day is a somewhat revisionist and sometimes poignant zombie story that would probably pay-off on a deeper level, if we witnessed the characters during the “before times.” Still, the implied suggestion these zombies still have a glimmer of their memories and feelings could easily support further exploration.

Without a doubt, Caye Casas & Alberto Albert Pinto’s RIP is definitely the high point of Asylum. The macabre tale of a nebbish sad sack miraculously resurrected just before his funeral recalls vintage Nacho Vigalondo, even more so for its subversive humor than the fact it is a Spanish language production. The practical effects are just a delightful bloody mess.

Ale Damiani’s dystopian anti-Trump screed M.A.M.O.N. just seems hopelessly dated now, unless you secretly believe the current Prez’s election challenges might have merit (you don’t, do you?). At least its short.

The second highpoint comes with the charmingly dark animated fable, The Death, Dad and Son, directed by Walgenwitz & Winschluss (a.k.a. Denis Walgenwitz and Persepolis co-director Vincent Paronnaud). The titular Grim Reaping personification of death happens to have a bratty son at home, who creates all kinds of supernatural havoc when he intervenes with the natural order of things. Their animation is wonderfully twisted, as is their idea of a happy, lessons-learned ending. Good stuff.

Andrew Desmond’s science fiction entry, Entity is definitely the outlier, but the visual effects are spectacular. His tale of a Russian cosmonaut adrift in space cribs from both Gravity and 2001, which is also impressive, in its way.

Adam O’Brien’s Bloodbath is brutal and pointless. Mercifully, it is also brief.

The horror gets similarly savage in Hendryk Witscherkowsky’s The Last Show, but the dramatic use of animation stills gives it a distinctive style. The tale of a psycho carnival-circus doing what it does best—killing audience members—revisits the territory of Hell Fest, Blood Fest, and The Funhouse Massacre, but it is the only tale that relates back to Brandon’s interstitial narrative.

It is a fact of genre life anthologies tend to be uneven, but in this case, the framing sequences are the worst part of the film (not counting the low point identified above), whereas they were the best part of the previous anthology, Nightmare Radio. Yet, the frame is critically important, because it sets the tone and gives the film its character. This is a definitely a film to watch only when you can fast-forward and scan (for Cleansing Hour, RIP, and The Death, Dad and Son). With that in mind, Asylum: Twisted Horror and Fantasy Tales releases today (11/17) on VOD.
Posted by J.B. at 6:00 AM