Taiwan B-Movies: On the Society File of Shanghai 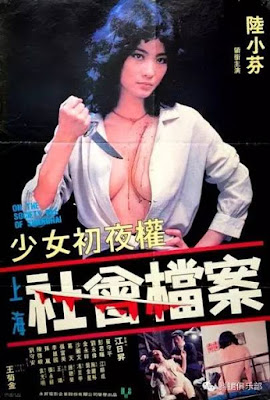 It wasn’t called “Scar Literature” for no reason. This adaptation of the Mainland stories that chronicled the crimes of the Cultural Revolution during the brief respite of the “Beijing Spring” period literally turns on the source of one of the protagonist’s scars. Technically a “B-movie,” Wang Chu-chin’s On the Society File off Shanghai is also loaded with wider historical and cultural significance, as viewers can see for themselves, now that it is currently screening online (for free) as part of Anthology Film Archive’s Taiwan B-Movies series.

Former respected military nurse Li Li-fang has been arrested for the most likely fatal attack on Wang Hai-nan, the black sheep son of a high-ranking PLA officer. Public security inspector Shung is under pressure to simply find Li guilty and close the case. However, he insists on mounting an investigation to uncover her motives. Shung always has been politically unreliable like that, but he is really pushing his luck this time around.

During the course of the investigation, Shung discovers Li and Wang were lovers, who recognized a shared aversion for the Maoist madness underway in each other. Unbeknownst to both, Wang’s mother (long divorced by his ambitious father) was Li’s mentor at school, but the disgraced principal tried to keep her connection to her son secret, for his own protection, after she was denounced during the Cultural Revolution. In fact, Shung has to win a staring contest with the Red Cadres still tormenting her, just to ask her a few brief questions about Li.

Society File is one of the films that made Liu Hsiao-fan a star, specifically in the Taiwan Black Movie subgenre of female revenge films. Li Li-fang is not exactly the sort of avenging angel she would eventually become, but she is certainly intense—especially her classic, career-making scene, in which she stabs her chest, just to prove how fearless she is. When you watch her, you can see how she could become a Taiwanese exploitation icon.

Liu’s flashback scenes with Richard Cui Shou-ping are sensitively rendered and add quite a bit of poignancy, but otherwise, the poor Cui was largely confined to death bed and assault scenes. However, the subtlety and world-weary integrity of Pang Gwan-fai’s work as Shung is what will make the film so intriguing for many contemporary viewers. As he expresses more and more skepticism regarding the Party line, he slowly evolves into the film’s genuine hero. We also worry about his continued safety, with good reason. Yet, Sha Lee-man truly becomes the conscience of the film, with her deeply humanistic portrayal of anguished Principal Wang.

The title is awkwardly translated, but it still makes more sense than you might initially think. It is a reference to the crimes that are censored by the CCP, but remain in society’s collective memory. It is also worth noting the surviving print of Society File is not in the greatest shape, but the roughest parts are probably during the opening credits, so most viewers should be able to work with it. Highly recommended as exploitation cinema with a social and historical relevance, On the Society File of Shanghai screens online via Anthology Film Archives, through December 15th.
Posted by J.B. at 6:00 AM