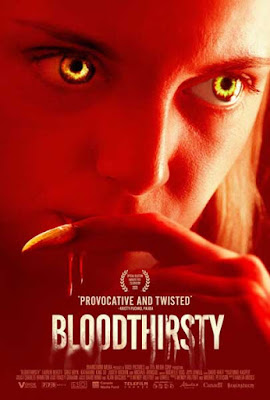 For years, one-named indie pop star “Grey” has been plagued by nightmares that she is a wolf tearing into flesh. She has probably wasted all her time in therapy with Dr. Swan. If the longtime vegan would just eat a cheeseburger, her cravings might disappear. Even if she really is a werewolf, they would probably still simmer down a bit. Instead, denial leads to danger in Amelia Moses’ Bloodthirsty, which releases in select theaters and on-demand this Friday.

Grey is facing a potential sophomore slum that could possibly render her a one hit-album wonder. Fortunately, the ultra-selective producer Vaughn Daniels agrees to produce her follow-up. He might be a little weird, but he was acquitted of murdering his girlfriend, so how bad can he be, right? Of course, Grey’s girlfriend Charlie intends to keep a close eye on her while she is recording in Daniels’ secluded country manor-studio.

Frankly, Charlie is troubled by (maybe even jealous of) their intense working relationship. He pushes her hard, which results in good music (or so everyone says), but he also exerts a dark influence over her. Does he really know what he is asking for when he tells her to turn her true self loose?

Bloodthirsty is sort of an alternative-rock Whiplash crossed with When Animal Dreams, with a thin veneer of LGBTQ-drama layered on top. None of these elements really work well, especially the relationship between Grey and Charlie, which always feels shallow and strictly by-the-numbers.

Of all the Trilby-like singer-songwriters who grew up in foster-care and might just be a werewolf, Grey absolutely must be the dullest. Somehow, Charlie makes even less of an impression. The most interesting work by far comes from Greg Bryk, as the ambiguously creepy Daniels. Unfortunately, that also means the legendary Michael Ironside is shamefully wasted in two brief and largely inconsequential scenes as Dr. Swan.

Also, rather problematically, Bloodthirsty is a werewolf movie without a lot of lycanthropic business. Moses and her effects team keep the transformations off-screen and skimp on the hunting scenes as well. Instead, we get several songs from co-screenwriter “Lowell” that sound like collaborations between Alanis Morissette and the Hemlock Society.

If you are in the mood for some old school full moon-howling, Bloodthirsty will inevitably disappoint. There have been plenty of subtle and sophisticated lycanthrope films, like Dutra & Rojas’s Good Manners, but they always stayed true to the nature of the beast within. In contrast, Bloodthirsty feels like a werewolf movie that doesn’t want to be a werewolf movie. Not recommended, it releases this Friday (4/23) in theaters and on-demand.
Posted by J.B. at 3:00 AM