Them: Covenant, on Amazon 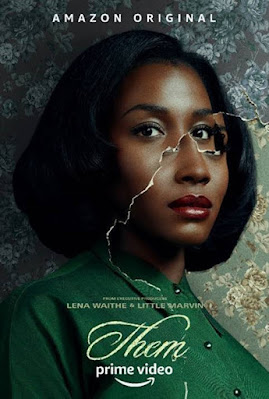 It is horror made possible by William Levitt, Jim Crow, and some really horrendous neighbors. A family moving to all-white East Compton as part of the 1950s Great Migration does not receive much of aa welcoming from the other families on their street, but they are also tormented by an evil, malignant force within their own home in creator Little Marvin’s 10-episode Them (season one has become known as “Covenant,” in the seasonal anthology style of American Horror Story), which is now streaming on Amazon Prime.

Henry and Lucky Emory endured an unimaginably horrific and heartbreaking loss in North Carolina, which will be revealed midway through the season, but astute viewers will pick up clues to its nature early on. Hoping for a new start in California, they bought their home sight-unseen, on predatory interest terms. Of course, the residents of Wisteria Lane freak out, especially childless queen bee Betty Wendell, who incites most of the men on the street into an ugly mob. The only one not completely carried away by her rhetoric is her own husband, the closeted Clarke.

If that were not bad enough, the Emory family is also tormented by an ancient malignant force. For the mother, it takes the vague shape of a traditional horror “hat man.” For the father, it is “Da Tap Dance Man,” a sinister black-face demon goading him to commit violent acts of vengeance. The youngest daughter is terrified by the schoolmarm-ish Miss Vera, while the older daughter is tempted into self-destruction by the personification of an idealized white bobbysoxer.

There is a lot going on in these ten episodes—probably too much. The tone and visuals crafted by Little Marvin and established horror directors like Ti West (The Innkeepers, The Sacrament), Daniel Stamm (13 Sins), and Craig William McNeill (The Boy, Lizzie) are impressive and effective. However, the first four episodes fall into a repetitive pattern, with the neighbors committing despicable acts of harassment and Lucky Emory responding in ways that are understandable, but will obviously compound their difficulties.

It is also hard to see why Henry constantly questions the state of Lucky’s sanity, when he is experiencing similar waking nightmares and violent hauntings. Eventually, Little Marvin and company give us the flashback-to-where-it-all-began-way-back-when episode (#8). The big swerve does not really make sense when it happens, but the ending is truly terrifying.

Deborah Ayorinde and Ashley Thomas are appropriately intense and viscerally convey the accumulated sorrow of the Emory parents. They give two truly harrowing genre performances. Jeremiah Birkett is a weird and unsettling series standout as the demonic blackface figure (he sometimes brings to mind the bartender in The Shining). Allison Pill is just wrong, in contradictory ways, as Wendell, whom the series first positions as a hateful caricature and then as an unconvincing victim of abuse, herself. Liam McIntyre is actually quite good as Clarke, the nearest thing to a sympathetic white character in Them, so it is too bad his conflicted character is not developed more deeply (not that the series needed to be longer).

It is impossible to miss the point-of-view in Them, but it often intensifies the tension and fear. However, it probably would have benefited from more concentrated editing (these days, a ten-episode run is nearly as daunting as War and Peace). Comparisons to Jordan Peele’s films really aren’t fair either (frankly, Them is scarier than Get Out), but the inverse title symmetry with Us is certainly unfortunate. The soundtrack also features a lot of late-career Nat King Cole, which might be unfair to Cole. Them is definitely a not entirely successful mixed bag of terror, but it is better than you might have heard. Fans of socially conscious “elevated horror” might consider checking it out, with a finger on the fast-forward button. It is now available on Amazon Prime.
Posted by J.B. at 9:00 AM