The Banishing, on Shudder 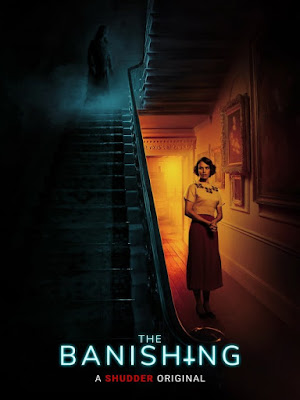 For those in the UK watching statist ideologies sweep across 1930s Europe, it was definitely a time that tried the nation’s soul. That was especially true for the family living in what has been called the most haunted piece of real estate in England. For this film, Borley Rectory has been changed to Morley Rectory, but the implications are the same for the Forsters. Their fragile family bonds will be gravely challenged in Christopher Smith’s The Banishing, which premieres this Thursday on Shudder.

Bishop Malachi did not tell Rev. Linus Forster about his predecessor’s grisly fate, but we see it plain as day in the prologue. His wife Marianne has a difficult backstory that included temporarily losing custody of her daughter Adelaide (from a long-absent father), but they are now all awkwardly together. Unfortunately, Rev. Forster is constantly passing judgement on his family, creating resentments for the angry spirits in Morley to explore. The politically hawkish and borderline pagan occultist Harry Reed warns them both separately, but only she pays him any mind.

The trio of credited screenwriters (David Beton, Ray Bogdanovich, and Dean Lines) punch up the traditional Borley lore, turning the original Benedictine occupants into an apocalyptic monastic death cult. It is pretty standard stuff, but it allows Smith a chance to exploit creepy hooded figures for easy scares.

Frankly, the atmosphere and horror trappings in Banishing are pretty strong. However, Linus and Adelaide Forster are so thinly sketched, it is hard to invest much in them or their torturous family dynamics. Jessica Brown Findlay gives Marianne a bit more substance, but Sean Harris is the real star as the abrasively eccentric Price. The real-life Price wrote the original ghost-hunting account of Borley that made its reputation, but he also debunked a number of psychic charlatans. In Banishing, he is all in when it comes to the supernatural, but also refreshingly hostile to the Reverend’s brand of appeasement pacifism. His caustic derision definitely well serves the film.

Frustratingly, Smith and company make an intriguing but insufficiently developed eleventh hour attempt to relate the weird supernatural business to the geopolitical evil afoot on the Continent. More of that would have made the film much more distinctive. Instead, The Banishing mostly feels conventional. Despite Harris’s contributions, it is basically just okay. For Borley and Price deep-divers, The Banishing starts streaming tomorrow (4/15) on Shudder.
Posted by J.B. at 3:00 AM