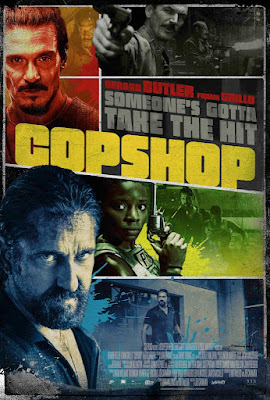 The drunk tank always looked like such a safe place when Otis crashed there on the Andy Griffith Show. Unfortunately, a rather unsavory character will avail himself of such hospitality at the Gun Creek police station. Nobody will be safe as long as he is there, but his competition is even worse in Joe Carnahan’s Copshop, which is now playing in New York.

Val Young is a cop who knows guns, but Teddy Murretto still manages to sucker punch her during a routine call. At least he apologized immediately after. The people who were chasing him are highly motivated, so his is happy to temporarily settle for the safety of a police cell and treatment for his minor gun-shot wound. Soon thereafter, Bob Viddick barrels into Murretto’s abandoned car, so the investigating troopers will book him into the station too. It was all part of his plan to get close to Murretto.

Viddick seems to operate according to some kind of hitman’s code, so Young might have been able to handle him. However, when Anthony Lamb, Viddick’s psychotic colleague also crashes the party, all bets are off.

Carnahan and co-screenwriter Kurt McLeod take the general situation of Rio Bravo, add the confined Die Hard-style action set-pieces and give them a Guy Ritchie-esque treatment—and frankly it all works like a well-oiled machine. The film eventually hinges on the question whether Young should trust an admitted killer like Viddick or an exploitative wheeler-dealer like Murretto, but the film and the audience both know she can only really rely on herself.

Frank Grillo is terrific oozing slime as Murretto. He should be a name-above-the-title star by now and maybe Copshop will bring him a step closer. Gerard Butler does usual tough guy thing as Viddick, but that is basically just what the doctor ordered. Grillo definitely brings more color and flamboyance, but they both more or less project an equal sense of danger. However, Alexis Louder out badasses everyone as Young, in what should turn out to be a star-making role.

In fact, the entire ensemble is quite distinctive, most definitely including Chad L. Coleman. He earns quite a bit of laughs as the overbearing Sgt. Duane Mitchell, but never at the expense of gritty cop cred. Toby Huss delivers a different sort outrageous gallows humor as Lamb, the off-the-rails assassin. It is quite a deep supporting cast, with memorable contributions also coming from Jose Cantillo, as Young’s buddy, Officer Pena and Ryan O’Nan, playing Huber, the mess-up on the Gun Creek PD.

Carnahan stages some satisfyingly energetic action scenes, while mixing in just the right level of wise-cracks. The Gun Creek station is also a very effective and cinematic-looking location. It looks realistically modern, yet still sort of grungy, so great credit is due to the design team led by production designer Jon Billington.

Copshop is an old school throwback, in the best sense. Carnahan and company go in guns blazing, but they still offer some well written dialogue and character development. Highly recommended for action movie fans, Copshop is now playing in New York at the AMC Lincoln Square.
Posted by J.B. at 5:45 AM