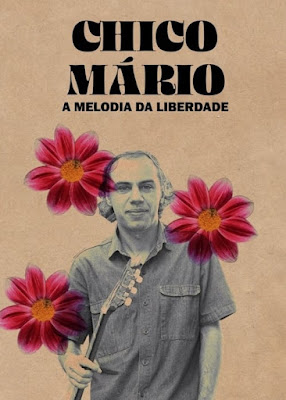 Everyone has heard of the girl from Ipanema, but not as many Gringo ears are familiar with the tradition of guitarists from Ouro Preto, in the state of Minas Gerais. João Bosco is one and Chico Mario was another. Both have documentaries that screen (online) during the 2021 Inffinito Brazilian Film Festival—and they both have some lovely guitar playing.

Pedro Pontes’s João Bosco e Aldir Blanc: That’s Partnership is a short doc that features Bosco reminiscing with Blanc, his longtime lyricist, who could be considered his Bernie Taupin. It’s pretty straight-forward filmmaking, but it is great fun for Brazilian music fans to listen to Bosco play some of their songs for his partner—one of which he had not yet heard in its current form.

Alas, Francisco “Chico” Mario is no longer with us, so he deserves a more substantial feature treatment in Silvio Tendler’s Chico Mario: A Melody of Freedom. Perhaps during his lifetime, Mario was somewhat overshadowed by his illustrious brothers, Betinho the sociologist and Henfil the artist. The trio were not just mutually accomplished. They also all inherited the hemophilia that ran in their family.

Mario’s time was limited, but he still inhaled Brazilian music, from choro to samba to classical, synthesizing all his influences within his own songs. Fittingly, we hear several of Mario’s solo performances and several more from Minas guitarists he influenced. Yet, in a something of an irony, the absolute standout musical segments feature the Ouro Preto orchestra playing symphonic orchestrations of his songs. They sound fantastic and they prove just how rich his work is, by transposing it into a radically new setting.

Even though Tendler sometimes lets the talking heads soundbites extend a bit too long, he gives the doc a very cinematic vibe by the inventive way he incorporates striking family photos and motion-comic-style pastel art. As a result, the film is visually pleasing and truly an audio treat.

Chico Mario really ought to be better known internationally. Tunes like “1964” and “1968,” named after years that hold similar political heaviness for Brazil (just as they do here) seem ripe for re/discovery. However, we would really like to see the Ouro Preto Orchestral sessions get a full and proper release—but Tendler deserves credit for having the taste and shrewdness to include them in the film.

Very highly recommended, Chico Mario: A Melody of Freedom stream-screens until tonight (9/10) as part of this year’s Inffinito Brazilian Film Festival, while shorts like João Bosco e Aldir Blanc: That’s Partnership (also recommended) screen throughout the fest.
Posted by J.B. at 2:45 AM