$9.99: the Animated Stories of Etgar Keret

It took a global village to breath life into these puppets. Their stories were written by an Israeli. Their production team is Australian, except for the Israeli-born, New York-based director. Their city could be any city, but incorporates elements of Tel Aviv, Sydney, and New York. They inhabit the sad and magical world of $9.99 (trailer here), Tatia Rosenberg’s stop-motion animated film based on Etgar Keret’s short stories, which opens this Friday in New York and Los Angeles.

Life is capricious for many residents of an urban high-rise apartment building. Fortunately, young unemployed Dave Peck is getting some answers from a mail order publisher promising the meaning of life at the low, low title price. As he tries to make sense of the world, many of his neighbors seem to be losing their way.

Peck’s father Jim is facing an existential crisis after witnessing the suicide of a passive-aggressive homeless man. His brother Lenny increasingly surrenders his own sense of identity to his new supermodel girlfriend. Ron has been dumped by his school teacher fiancé because of his compulsive pot smoking, egged on by the two-inch stoners who visit him. Albert the widower just wants some company, which he gets when Jim Peck’s panhandler returns as an incompetent angel. Loneline

ss and alienation are the norm, as the neighbors interact and go about their business, largely oblivious to the strange events going on in their building.

While the puppetry of $9.99 is quite remarkable, it is important to note the film started with the stories of Etgar Keret (co-director of Jellyfish, another film of braided storylines), unlike many animated films that seem to start with some visual concepts and cobble a story together as they go. In a way, it is like an animated Short Cuts, combining an author’s individual stories into a larger mosaic. However, the relatively brief $9.99 is far more manageable than Altman’s three hour film.

Great credit should be given to production designer Melinda Doring, puppetmaster Phillip Beadsmoore, and animators Steve Cox and Anthony Elworthy for creating the compelling look and feel of the $9.99’s world and characters. Matching the peculiarly expressive puppets, $9.99 uses the voices of some of Australia’s best known actors, including recent Tony winner Geoffrey Rush as the homeless angel. Perhaps the strongest vocal performance comes from Anthony LaPaglia (of Without a Trace fame), somewhat playing against type as the middle-aged Jim Peck, making his story the most human of the film. 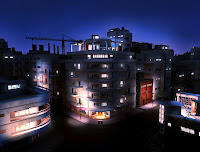 Despite its deceptively whimsical style, $9.99 is a dark, moody film. It is definitely animation for an adult audience—parents should be warned, there is on-screen drug use and puppet nudity. Even if some puppet-characters feel under-developed, like slacker Ron and his ex- fiancé, it is an intriguing film that fits together Keret’s stories quite effectively. It is easily the smartest, most distinctive looking animated feature film released since Persepolis. It opens Friday (6/19) in New York at the Landmark Sunshine.

Photos courtesy of Regent Releasing.
Posted by J.B. at 3:15 AM