The villagers of Cupang believe they are literally cursed. Suffering from desperate poverty and a prolonged drought, all they have is their faith, which is about to be sorely tested in Ishmael Bernal’s Himala (a.k.a. Miracle, trailer here), an internationally acknowledged classic of Filipino cinema that screened as part of the IndioBravo Film Festival.

Although Himala is very definitely a product of the Marcos era, in many ways it feels like a medieval mystery play. While unsparing in its depiction of the extreme privation denied by the regime, it portrays a village where faith is a tangible part of everyday life. Many sincerely believe the legend of Cupang’s curse, which supposedly fell over the town after they turned away the Virgin Mary disguised as a leper. It is a story which clearly had an enormous psychological effect on Elsa, a grown foundling with a tendency to daydream.

Following an unexpected eclipse, Elsa reports of her vision of the Virgin on a craggy hilltop and the miraculous healing powers then bestowed upon her. Initially, the church tries to dissuade her from such claims of religious revelation, but when stories of her supposed faith healing gain currency, her cult-like following takes on a life of its own.

Suddenly, Cupang is swarmed with pilgrims seeking Elsa’s healing power. Yet ironically, with the religious revival comes a surge in violent crime and other vices associated with those preying on the faithful. One such entrepreneur is Elsa’s childhood friend Nimia, a former Manila prostitute, who has returned home to open a nightclub of dubious propriety.

Combining depictions of the fervor Elsa inspires with the eerily desolate landscape, Bernal creates a truly apocalyptic vision of religion. Himala is a pointed critique of a church that prefers to deny the miracles its parishioners long for, as well as the credulous nature of those all too willing to believe and be fleeced by Elsa’s handlers. Yet, Bernal eventually seems to allow for a need to believe in something larger than one’s self.

Nora Aunor became an icon in the Philippines for her earnest portrayal of the pious Elsa. However, post-modern American audiences may well be more moved by the greater nuance of Gigi Dueñas as the tough but vulnerable, and ultimately compassionate, Nimia. 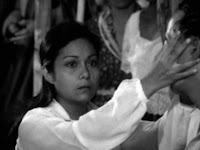 Himala seems like a film ripe for deconstruction. Despite his overt hostility to religion, Bernal created such a surreal environment, faith seems to be the only response which makes sense. It holds a place of distinction in Filipino cinema, having won several international festival awards and recently winning honors as the all-time best Asian film in the CNN Asian-Pacific Screen Awards viewers’ poll. It is a challenging film of undeniable power, making it a perfect retrospective feature for the first (hopefully annual) IndioBravo Film Festival and a logical candidate for the IndioBravo Film Foundation’s forthcoming monthly screening series.
Posted by J.B. at 3:00 AM