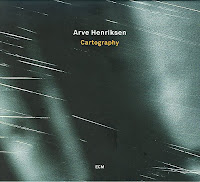 Inspired by the sound of traditional Japanese Shakuhachi flutes but employing the latest in sampling and programming effects, Norwegian trumpeter Arve Henriksen’s music is an intriguing dialogue between the ancient and the post-modern. Happily, there is also substance to his music, making Cartography, Henriksen’s debut ECM release as a leader, a challenging but richly satisfying recording.

Often compared to label-mates Nils Petter Molvaer and Jon Hassell, Henriksen’s moody, airy trumpet style should also appeal to fans of Erik Truffaz. All four trumpeters have a penchant for mixing their refined technique with various forms of electronic effects and distortion, arguably following in the tradition established by the Miles Davis electric sessions greatly shaped and edited by producer Teo Macero.

Blending elements of improvised jazz, avant-garde minimalism, and traditional Japanese music, Henriksen creates trance-inducing soundscapes, like the opening “Poverty and Its Opposite,” in which his lyrical trumpet seems to float above Jan Bang’s pulsating samples. Henriksen’s ability to channel Shakuhachi sounds through his instrument can be heard during the eerie introduction “Before and Afterlife,” the first of two spoken word tracks featuring David Sylvian, the former front-man of the British New Wave band Japan. Henriksen’s lonely trumpet and Bang’s unsettling programming effectively compliment its themes of transience and alienation.

Henriksen’s classical inspirations are probably most explicit on “Recording Angel,” which samples the Trio Mediaeval performing “Oi me lasso,” which they also recorded for ECM on their Words of the Angel release. Thanks to Bang’s disorienting effects and the leaders plaintive trumpet, the effect is nothing like Gregorian mood music.

Despite the highly produced nature of most tracks, both Henriksen’s improvisations and compositions are often quite arresting. On the hypnotic “Migration,” his trumpet quivers and cracks over the Bang’s otherworldly loops. Anchored by bassist Lars Danielsson, Henriksen sounds much like Chet Baker playing inside a Dali collage. Yet, perhaps his most poignant playing can be heard on the haunting “Loved One.” It all concludes with the elegant “Sorrow and Its Opposite,” which nicely synthesizes the disparate classical and electronic elements heard throughout the previous selections.

Cartography is consistently compelling music that really insinuates itself into the listeners ear. While Henriksen shows a bold flair for experimentation, his music has an undeniable power and is frequently surprisingly accessible.

Given the layers of production involved in Cartography’s creation, one might wonder how he sounds in live performance. Those curious New Yorkers should check out Henriksen playing with Nils Petter Molvaer tonight (6/16) at Le Poisson Rouge.
Posted by J.B. at 3:30 AM