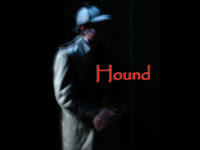 In Arthur Conan Doyle’s stories, Sherlock Holmes is always well served by his famous mantra: “Once you eliminate the impossible, whatever remains, no matter how improbable, must be the truth.” Yet a grieving Dr. Watson might not want to eliminate the impossible in Hound, John Patrick Bray’s revision of the Hound of the Baskervilles, now playing at the Robert Moss Theater as part of the Planet Connections Theatre Festivity.

Following the outline of Doyle’s original, the eccentric Dr. Mortimer has sought the aid of Sherlock Holmes following the mysterious death of Sir Hugo Baskerville, apparently the result of an ancient family curse. However, the doctor is now a woman with quite a burlesque sense of fashion and a cranial fetish.

The good Dr. Watson is not his usual sidekick self either. As Hound opens, he is in an uncharacteristically metaphysical state of mind, questioning why Holmes, the skeptical rationalist, seemingly rose from the dead after the incident at Reichenbach Falls, while his wife’s death from a prolonged illness is irrevocable. He also seems to have an uncanny Dr. Doolittle ability to talk to dogs, which is going to be useful on this case.

As Holmes, Ryan Knowles (on the night of 6/20) is the embodiment of erudite arrogance. Physically, he brings to mind David Bowie in the role of the famous sleuth, which would actually be pretty good casting. However, this Baskerville case belongs to Dr. Watson, one of the most unfairly belittled characters in mystery fiction. Cavan Hallman fully fleshes him out, conveying his grief, intelligence, and humanity.

Bray’s clever script follows the storyline of Baskerville surprisingly faithfully, yet leads to very different outcomes for its cast of characters at each turn. His philosophical themes are quite intriguing, successfully adding another layer to the familiar Hell Hound tale. While some of the surreal monologues, like those exploring the identity of the largely overlooked housekeeper Mrs. Hudson, take the audience a bit too far out of the story, the strong stage presence of Hound’s Holmes and Watson always reasserts the show’s momentum.

Following her recent production of Go-Go Killers, director Rachel Klein again shows a flair for genre theater, staging Hound in the style of a Victorian vaudeville, complete with title cards for each change of scene, which is not inappropriate to the story. It is an often bizarre but thoughtful take on Baskerville case, which should entertain both casual and diehard Holmes aficionados. Hound runs through Thursday (6/25), with its proceeds going to RAINN (Rape, Abuse & Incest National Network).
Posted by J.B. at 6:30 AM