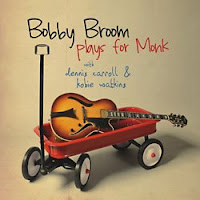 Like an ambitious ice-skating jump, interpreting the music of Thelonious Monk carries a high degree of difficulty for jazz artists, but those who nail it, are guaranteed to make a lasting impression. Yet, Bobby Broom makes it sound easy as pie on Bobby Broom Plays for Monk, his refreshingly laidback new CD tribute to the legendary composer-pianist.

Though he was only twelve years old when Monk retired from music in 1973, Broom could claim an apostolic link to the jazz legend a mere four years later, beginning his long professional association with tenor giant Sonny Rollins in a Carnegie Hall concert appearance. Rollins in turn had played on a 1953 quintet session led by Monk and featured the distinctive pianist on his 1957 Blue Note album simply titled Sonny Rollins, Volume 2.

Frankly, there is no shortage of Monk homage CDs on the market, but most tend to showcase the leader’s pyrotechnics. Broom wisely takes the opposite approach, largely keeping the mood bluesy and relaxed, like an after-hours session played for the enjoyment of the musicians rather than to impress the square audience.

Opening with Monk’s “Ask Me Now,” Broom establishes the smoky azure vibe right from the start. Though the guitarist does not solely confine himself to ballads, even when he kicks up the tempo, as on the following “Evidence,” his technique is so fluid and smooth, the Monk standard does not sound nearly as jittery as on typical renditions. Broom shows an almost effortless facility for Monk’s slightly off-kilter melodies, like the particularly distinctive “Work.” Still, Broom’s finest moments probably come on Monk’s achingly lovely “Ruby, My Dear.”

Although most of the program consists of Monk tunes, Broom also interprets two standards which Monk also covered. The spritely “Lulu’s Back in Town” is a sly charmer that nicely demonstrates Bloom’s rapport with his trio, while he takes “Smoke Gets in Your Eyes” as a heartfelt solo feature to conclude the disk. Throughout the balance of the session, Broom gets effective support from bassist Dennis Carroll and drummer Kobie Watkins, who lock-in behind the leader, propelling the music forward at a nice-and-easy trot.

Broom’s take on Monk has resulted in some rich but accessible music. Even though many of the selected Monk standards will be very familiar to most jazz listeners, his bluesy approach makes them sound fresh. It is a great disk for late night hangs and one of the strongest Monk tributes in recent years.
Posted by J.B. at 3:40 AM