Though Truffaut’s reputation was established with intensely personal films that largely defined the French New Wave, in the late 1960’s he directed two stylish thrillers explicitly inspired by the visual techniques and strategies of Alfred Hitchcock. Like Hitchcock’s Rear Window, both were also based on the fiction of Cornell Woolrich (sometimes writing under the pen-name William Irish). Though, not initially well received by critics, they have held up well in retrospect, particularly Mississippi Mermaid (trailer here), which begins a special week long revival this Friday at BAM.

Mississippi has nothing to do with the American South. The film takes its name from the ocean liner which is to deliver Louis Mahè’s fiancé, Julie Roussel. Mahè and Roussel have never met, having conducted their courtship through the pages of the personal ads. When the ship docks in remote Reunion Island, the woman claiming to be Roussel looks nothing like the photo she sent to him. However, since she is played by Catherine Deneuve, Mahè lets it go. He admits to a deception as well. Instead of being the foreman of the local cigarette factory, he is actually the owner. Like a good sport, she accepts life as the new mistress of his sprawling tobacco estate.

Of course, little discrepancies keeping popping up, leading the audience to question just who did Mahè marry. However, the cigarette king of Reunion Island prefers to live in denial, until his phony paradise comes crashing down. Jean-Paul Belmondo and Catherine Deneuve seem perfectly cast as the driven Mahè and the calculating Roussel. Yet, their chemistry feels a bit off. In this love-hate relationship, the hate is perfectly believable, but the love not so much. However, they are complimented by a distinctive supporting cast, including co-producer Marcel Berbert (a frequent Truffaut collaborator), as Mahè’s cautiously suspicious business partner Jardine.

Truffaut and cinematographer Denys Clerval make excellent use of the exotic island locale. Though lush and green, there is also something disorienting and ominous about the jungle and tobacco fields 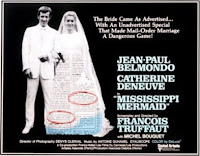 surrounding the seemingly happy newlyweds. Truffaut takes visible delight in his noir tropes, dramatically pin-pointing the audience’s field of vision on something dangerous, like a pistol, or some nefarious bit of business. Composer Antoine Duhamel also heightens the Hitcockian vibe with his Bernard Hermann inspired score.