Nigeria has a vibrant pop music scene. It is also a country where many share both an Evangelical Christian faith and a lingering fear of witchcraft. If you think such an environment could produce fascinating cinema you would be correct. Nigerian can boast of some dynamic films and filmmakers, which sometimes shines through in Ben Addelman and Samir Mallal’s documentary Nollywood Babylon (trailer here), now playing at the Museum of Modern Art.

The Nigerian movie business, affectionately known as Nollywood, currently ranks third in global film production right behind Hollywood and Bollywood—and its growing rapidly. Yet hardly any of its films ever screen in proper movie theaters. Their distribution is dominated by the Lagos street markets, where fans eagerly purchase new DVDs for home viewing. Operating within this milieu, Lancelot Oduwa Imasuen emerges as Babylon’s likable protagonist and guide to the world of hyper-kinetic Nollywood filmmaking.

Part auteur and part entrepreneur, Imasuen is a charismatic representative of Nollywood. He is also a practicing Christian, who we see leading his cast and crew through the opening prayer on the set of his 157th film during Babylon’s early scenes. As long as Addelman and Mallal have their camera pointed at him, the film is on solid ground. Unfortunately, when their focus strays to other aspects of the Nollywood scene, Babylon often seems to invite viewers to laugh at, rather than with, its subjects. Many clips seem to be cherry-picked for their ultra-cheesy effects, particularly those produced by "born-again" Christian filmmakers, who have captured significant market-share in Nollywood.

The problem with Babylon is it is unclear whether the documentarians are celebrating the resourcefulness of Nollywood filmmakers, or mocking them for either their Christianity or traditional 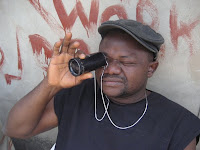 superstitions (as when one filmmaker explains how witchcraft shut-down his location shoot in an area associated with the supernatural). At least they gave Babylon a high-energy soundtrack, featuring some cool contemporary Nigerian afro-pop that nicely compliments the “sharp-sharp let’s go-let’s go” Nollywood aesthetic.

Based on the high-end Nollywood films which have reached the American festival circuit, it seems like they are producing highly watchable pictures, particularly because of their unusual blend of Christian and supernatural elements. Filmmakers like Imasuen deserve a lot of credit for developing an audience and making money with their films, which is more than most documentarians can say. Babylon is at its best when it takes the audience into the intriguing world of Nollywood, but their impulse to emphasize the cruder aspects of films typically produced for less than $10,000 ultimately does not serve the documentary well. It runs through Thursday (7/9) at MoMA.
Posted by J.B. at 10:00 PM