Jazz from the Philippines: Mon David 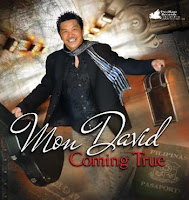 Unlike Japan and the Scandinavian nations, the Philippines is not a country with an international reputation for fostering local jazz talent. However, two Filipino artists are determined to change that. After making a guest appearance on fellow countryman-vocalist Charmaine Clamor’s My Harana, Mon David now steps into the spotlight with his American debut Coming True.

David has a smoky baritone, and with his pencil-thin moustache, vaguely bears a weird resemblance to Robert Goulet in the liner photos. Yet, David’s vocal flair extends beyond crooning for swooning. It turns out he has a real gift for scat singing. In fact, his vocalizing effects are the first sounds to be heard on the opening track, a Filipinized rendition of Nnenna Freelon’s lyrics to the Wayne Shorter composition, “Footprints.” It is a dramatic vocal showcase for David, frequently segueing between scat and lyric interpretation, while allowing space for a brief but swinging solo statement from pianist Tateng Katindig.

Though arranged as a warm ballad, David still shows his powerful range on the standard, “Invitation.” Featuring special guest Justo Almario on tenor saxophone, it is the sort of romantic vocal jazz that never went out of style, and has recently experienced a surge of popularity. David also chose some tunes that could be considered slightly off-the-beaten path, including Abbey Lincoln’s “Throw it Away.” Aside from a few melismatic moments, David’s sensitive interpretation plays it scrupulously straight with her bittersweet lyrics.

Returning the favor from Harana, Clamor herself also makes a guest appearance on True. Though their harmonized scatting is quite impressive on “Only Once,” the tune itself might be a bit too cute. At least it serves as an effective vehicle for another swinging solo from Katindig. In contrast, one of True’s strongest moments comes with David’s stripped down version of “There is No Greater Love,” accompanied solely by bassist Dominic Thiroux.

As Clamor has championed a “Jazzipino” concept fusing jazz and traditional Filipino musical forms, David also brings a distinctly Filipino sensibility to traditional jazz standards. He performs a memorable version of Thelonious Monk’s “Well You Needn’t” with his own Filipino lyrics, redubbed “Kailangan Yan.” It also proves conducive to David’s most dynamic, uninhibited scatting to be heard on True.

Blessed with a rich voice, David is a well-rounded jazz vocalist, and even shows some finesse on acoustic guitar. While True certainly leans towards jazz’s straight-ahead mainstream, David’s Jazzipino touches give it a distinctive sound. It is a stylish recording that casual jazz listeners will find quite accessible.
Posted by J.B. at 8:30 AM