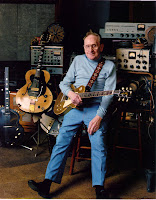 Hip New Yorkers used to look forward to Monday nights. That was when Les Paul ruled the roost at the Iridium Jazz Club, packing the house on what is traditionally the slowest night of the week for any nightclub. When I caught his Monday night gig two years ago, Paul was still an energetic entertainer, flirting outrageously with his bassist Nicki Parrott (whom it should be noted was a very good sport about it all). Though his supportive group helped carry the musical load, he was still playing at a remarkably advanced level, particularly for a musician in his early nineties.

Still, for many fans, it seemed Paul’s personality the biggest draw. That wit and spirit was nicely captured in American Masters’s Les Paul: Chasing Sound, directed by John Paulson, which remains an engaging introduction to the man whose very name is synonymous with the guitar. What follows is revised and edited from my 2007 DVD review:

Paul worked as a musician of the highest order in the jazz, pop, and country genres, but perhaps his greatest contribution was an innovator, pioneering the use of multi-tracking, over-dubbing, and the solid body electric guitar. Without these developments, it would be impossible to imagine rock & roll as we know it.

Wisely, Paul is the dominant voice of Chasing, in both interview segments and performance clips. Through Paul’s recollections, we get a picture of a resourceful young musician. Despite being told by big band leader Fred Waring, “I’ve got sixty-two Pennsylvanians to feed and I’m not looking for any more,” an impromptu hallway audition landed him a position with the Waring outfit. After the Pennsylvanians, Paul became associated with Bing Crosby, and eventually found his greatest popular success with his vocalist-wife Mary Ford.

To its credit, Chasing is still entertaining on the second or third viewings. Paul’s humor and charm come through clearly, particularly in the extensive bonus performance footage, as when he reacts in mock horror when Steve Miller (his god-son) pulls out a Fender (Paul of course is the original designer of Gibson’s solid body Les Paul, called: “by far, the most successful endorsement relationship ever in the history of musical instruments”).

Perhaps the greatest aspect of his live performances, as well as Chasing, was Paul’s personality. Still, the DVD edition included a choice Iridium set, rare archival footage, and Paul duets with the likes of Keith Richards and Chet Atkins that will be rewarding viewing for anyone who ever strummed an electric guitar. After all, they could not have done it without Les Paul.
Posted by J.B. at 11:36 AM