The Flower of Evil: Kimjongilia

Kang Chol-hwan never learned what crime his grandfather supposedly committed, but he understood only too well what he was guilty of. He was related to his grandfather. Such is the nature of Kim Jong-il’s North Korea, where families of ostensive state enemies are purged to the third generation. Kang and other survivors of DPRK concentration camps give harrowing testimony of Kim Jong-il’s police state in N.C. Heiken’s extraordinary documentary Kimjongilia (trailer here), which screens for a week starting this Friday, as part of New York DocuWeeks.

Kimilsungia and Kimjongilia are hybrid flowers crossbred to commemorate the dictator and his heir. Despite this flower fetish, their North Korea is a hellish living environment. The degree of social control exercised by the Communist state apparatus is reminiscent of 1984, but the ruling Kim dynasty added an element of random cruelty that arguably surpasses the abuses imagined in Orwell’s speculative novel.

Though some might intellectually accept the closed nature of North Korean society, the extent of Kim Jong-il’s oppression truly defies human comprehension. Intellectual and artistic freedoms simply do not exist there. It might sound like a sick joke, but concert pianist Kim Cheol-woong realized he had no choice but to cross the border into China once he had been overheard playing the work of Richard Clayderman, a French light-classical recording artist. However, there is nothing amusing about a government that frequently uses starvation as a weapon against its own people and sentences young children like Kang to work camps as a matter of routine.

While life in Kim Jong-il’s prison camps might be inconceivably brutal, China hardly earns any human rights kudos in the film for its treatment of North Korean refugees captured crossing the border. Wo 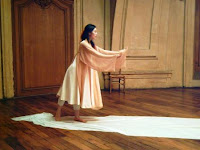 men are frequently sold into white slavery and torture is standard operating procedure. For instance, Kim Cheol-woong speaks of the hours of beatings he endured at the hands of Chinese authorities while suspended by his ankles, while desperately trying to protect his hands.

Despite the fact that Heiken never shows her features directly, “Mrs. Kim” is the symbolic face of Kimjongilia. A dancer in her youth, her great misfortune was to befriend a woman Kim Jong-il took as his lover. Although she maintains no sensitive information was ever revealed to her, she was condemned to a concentration camp, along with her entire family. In addition to setting Kimjongilia’s general tone, her story also inspires the dramatic interpretive dance interspersed throughout the film.

Not only is Kimjongilia a chillingly portrait of totalitarianism, it is a remarkably well-crafted film. The work of composer Michael Gordon and dancers Seol-Ae Lee and Yumi Ahn gives the film a classier sheen than the average PBS documentary and effectively enhances the emotional impact of the survivors’ stories. Wisely assembled, Heikin deftly mixes archival footage, the dance sequences, an animated timeline, and devastating first-person testimony. She allows ample time for her interview subjects to tell their difficult stories, yet the pacing never flags.

Heikin documents heartbreaking tragedies deliberately perpetrated by a government with absolute disregard for the well-being of its citizenry. It is a much needed dose of cold, hard reality for those who think a goodwill concert by the New York Philharmonic can alter the behavior of Kim Jung-il. Kimjongilia is an absorbing and horrifying film that deserves a wide audience. Highly recommended, it screens during DocuWeeks, August 14-20 at the IFC Film Center.
Posted by J.B. at 3:15 AM