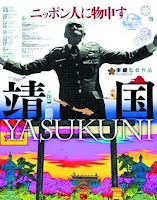 The Japanese call it the “Great East Asia War.” However, in most countries, World War II has seemed a more appropriate name, since there were indeed a few important battles in the European Theater as well. That difference of nomenclature only hints at the extent of WWII revisionist sentiment Chinese director Li Ying examines in his Japanese documentary Yasukuni (trailer here), which opens in New York this coming Wednesday.

Kariya Naoharu is the final surviving artisan forging swords in the workshop connected to the Yasukuni Shinto shrine, which honors those who died in military service to the emperor. Though founded in 1869, eighty percent of the consecrated were killed in World War II. Of course, you will not hear that term in the documentary. Pearl Harbor? Never happened. Neither did the Rape of Nanking according to visitors at the shrine. As translated in the film, the recorded message at the Yasukuni visitor center veers pretty close to Orwellian territory, declaring the war was strictly a defensive affair from the Japanese perspective.

Denial is one thing, but the inclusion of many of the shrine’s honored dead might be even more problematic. According to the film, convicted war criminals, including those involved in a beheading contest in Nanking, are indeed consecrated in Yasukuni. Conversely, some families want their deceased loved ones removed from the shrine for religious or cultural reasons. The Yasukuni flack seen accepting a petition from a coalition of Buddhists and ethnic Taiwanese and then dissing the families certainly does not do any PR favors for the shrine.

Former Prime Minister Koizumi takes heat from some for praying at Yasukuni while still in office, but to be fair he was in a tricky position. It is completely appropriate to honor the Japanese rank-and-file who died in WWII, but one would hope a distinction would be made between them and the militarist government, whose policies led to their deaths, as well as those who committed war crimes in its name.

Although Li interviews Naoharu on camera, there is very little talking in the film and no traditional narration. Long sequences of Yasukuni simply consist of the various ceremonies and protests at the controversial shrine. At times, Li captures some truly odd moments, like an idiot American protestor who feels compelled to show his support for Koizumi, to the understandable confusion of the Japanese present. Unfortunately, the ambient- vérité style often feels sluggish. After a while, you get the point and want to move on.

Periodically, the audience also sees the taciturn sword smith going about his craft with a Zen-like calm (that is oddly fascinating), juxtaposed against historical images of the Imperial war machine. F

or most viewers, Yasukuni will probably represent the most blacksmithing they will see on-screen in a month of Sundays.

Clearly, the film was originally intended as a challenge to Japanese audiences. The fact that Li Ying is Chinese did not exactly help its Japanese reception. Yet given Li’s meditative style, the film hardly feels like a polemic broadside against the Japanese people. In general though, it seems safe to say there is more than a little denial at work in Japan regarding World War II, which many would probably prefer not to advertise to the rest of the world. Yasukuni is often quite eye-opening, but it would have benefited from a tighter, brisker edit. It opens at Film Forum on August 12th.
Posted by J.B. at 9:30 AM