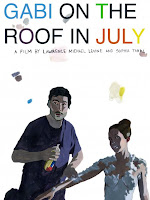 In Brooklyn, everyone is an artist and nobody works for a living. That preconception annoys Sam. He happens to be an artist himself, but he has built up genuine credibility with the local gallery scene. He would like nothing better than to find a job for his younger sister Gabi, yet everything turns out to be more complicated than he expected in Lawrence Michael Levine’s Gabi on the Roof in July (trailer here), which appropriately opened this year’s Brooklyn International Film Festival.

Gabi has issues. Bitter over their parents’ divorce, she needs Sam to become a surrogate father-figure. She does not make it easy though, constantly parading around the apartment nude while overtly flirting with Sam’s deadbeat college roommate Garrett. Dealing (rather badly) with his own relationship dramas, Sam frequently loses patience with his sister, inadvertently pushing her into Garrett’s smarmy arms.

At its best, Roof depicts all the most uncomfortable moments of current and former relationships with brutal honesty. Levine and co-writer Kate Kirtz’s caustic dialogue can cut like a knife. It is also often surprisingly explicit, especially when coming from the still youthful looking Gabi. In fact, Roof would be more ingratiating had Gabi’s acting-out been toned down a bit. Yes, she is a confused kid, but the sexualized situations she maneuvers her brother into are kind of creepy.

Roof effectively uses its Brooklyn locales and each and every cast member look like they came straight off the streets of Williamsburg, (which by and large was the case). Director and lead actor Levine displays a winning deadpan delivery, making Sam a flawed but relatively likable everyman. As his sister Gabi, Levine’s real life fiancé (which also seems weirdly Freudian) and producer Sophia Takal is certainly fearless, but frankly gives a bit too much to the role.

Still, there is definitely a sense of much unspoken history between the two siblings. It is also a shrewd strategy to focus on the brother-sister dynamic, which is not seen on film particularly often (the last examp

le that comes readily to mind would be Cédric Klapisch’s Paris).

There are some sharply comic moments in Roof, as well as some nervous laughter. Indeed, that is the nature of the film, alternating between moments of genuine inspiration and cringing embarrassment. Yet, it is undeniably about as Brooklyn as a film can get, making it a perfect selection for BIFF, where it has been selling out its screenings, including tonight’s (6/12) showing at the Brooklyn Heights Cinema.
Posted by J.B. at 6:00 AM