This is not a Japanese Sweet Valley High. However, it has murder, madness, revenge, peer pressure, and AIDS—all your basic middle school stuff. When a teacher’s four year old daughter is murdered by two of her seventh graders, Yuko Moriguchi uses a brutally effective tool to extract her retribution on the guilty students—social marginalization by their peers. It is all part of her stone cold plan in Tetsuya Nakashima’s jaw-dropping, hyper-realistic drama Confessions (trailer here), the centerpiece of the New York Asian Film Festival and the opening night selection of Japan Society’s Japan Cuts: Festival of New Japanese Film, presented jointly by the two fests.

Moriguchi has some surprising news for her homeroom class. She is resigning her teaching position, because her heart simply is not in it anymore. She still mourns her daughter Manami, who drowned in the school’s swimming pool under mysterious circumstances. Her grief is all the more acute because Manami’s biological father, whom Moriguchi was never able to marry, is rapidly deteriorating from full blown AIDS. However, she knows the identity of the culprits thanks to the confession of the arrogant mastermind. Coolly and methodically, she reveals their identity to her stunned class after injecting the young killers’ milk cartons with the infected blood of her former lover. Responding out of fear and ignorance, the class reacts to that bit of news as if Manami’s murders had the plague. So ends Moriguchi’s “confession” and the first twenty minutes of the film. From there, things start to get dark and twisted.

Indeed, Moriguchi’s confession, the first of four, is so riveting, one expects a major let down once Nakashima shifts narrative gears. Yet the intensity only momentarily flags, as we start to witness the disconcerting aftermath of Moriguchi’s j’accuse. It is not over anyone yet, but Moriguchi temporarily retreats from view, allowing the high school’s harsh social dynamics to do her bidding.

Nakashima’s razor sharp screenplay (based on a novel by Kanae Minato) slices through the human condition, down to the bone. Frankly, viewers may find themselves deeply disturbed by their own reactions to Confessions’ ultimate twists and turns. Perhaps lazy reviewers might compare it to a film like Heathers, but the similarities are only superficial. Nakashima’s morality play about amoral youth is absolutely uncompromising and holds several sit-up-in-your-seat shocks for the audience.

Takako Matsu, seen during last year’s NYAFF in the escapist K20: Legend of the Mask, delivers a powerful, perfectly pitched performance, expressing all the pain and rage no mother would want to experience, whi 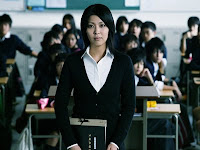 le maintaining an alarming sense of outer calm. Developed with Matsu specifically in mind, she vindicates Nakashima’s faith in spades.

Masterfully helmed, Nakashima maintains an eerily unsettling atmosphere while coaxing his young cast to some truly frightening performances. Smart and chilling, Confessions is a highlight of both NYAFF and Japan Cuts, as well as any other festival it might play. Highly recommended, it screens at the Japan Society on Thursday (7/1) and Sunday (the 4th).
Posted by J.B. at 3:00 AM