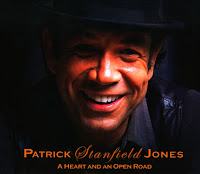 It would probably be quite a challenge to keep a club exclusively dedicated to the blues open for business in the Times Square neighborhood. Still, the supposed blues influences of a lot of acts that play B.B. King’s Blues Club on 42nd Street seem a bit tenuous. Happily, this was not the case with Patrick Stanfield Jones and his band, who played the King’s room recently as part of a triple bill that also included the electric roots group McMule and the Commander Cody and the Lost Planet Airmen. As can be heard on his latest CD, A Heart and an Open Road, Jones is a legitimate blues rocker with a honky-tonk spirit and the occasional invigorating hints of jazz influences.

You can definitely hear the roadhouse in the opening title track. Jones’s guitar is ranges into legitimate rock-and-roll territory, but Steven “Muddy” Roues’s harmonica still keeps the proceedings grounded in the blues. The following “No One Ever Tells You,” a blues lament covered by Ruth Brown and B.B. King himself, is a perfect showcase for Jones’s laidback vocals. He definitely pulls out the blues licks here, with Rave Tesar adding grease on the organ.

Shrewdly, Jones resists unleashing his inner guitar hero on Cream’s “Sunshine of Your Love.” Instead, his easy-going, idiosyncratic rendition and the groovy arrangement give the hoary rock standard an appealingly fresh sound. However, the hard-rocking take on Cy Coleman’s “The Best is Yet to Come,” previously covered by the likes of Tony Bennett and Sinatra, frankly sounds a bit gimmicky.

The addition of a jazz horn-line, consisting of Kit McClure on tenor saxophone and Erik Lawrence on baritone, also lends a funky texture to Jones’s group in concert. On Road, they are best showcased trading off on “Crazy About You,” a ruckus swinger inspired by Dizzy Gillespie’s “Land of Oobla Dee” that is a real highlight of the session.

Road features a diverse selection of Americana sounds, including a sensitive country-style ballad, “If You Were My Baby.” Still, Jones and his band are at their best when delving deep into the blues-rock b

ag, as on the old school drinking song, “Whiskey (Don’t Bring Me Down).” Evidently someone who has seen a lot tough times, Jones appropriately ends with an optimistic sounding up-tempo country-rock empowerment anthem “Changing of the Guard.” Wickedly catchy, it is a very effective set closer.

As someone who writes about coming through adversity, Jones’s music is clearly quite compatible with the musical therapy concept of Motema Music founder and president Jana Herzen, who also contributed background vocals to Road. The resulting session is a rootsy, bluesy excursion into the roadhouses and juke joints of American song. Honest and energetic, Road is now available at fine music retailers everywhere.
Posted by J.B. at 8:45 AM