In Brazil, even the leftists are fun. At least, Rita Cadillac is. A one-time socialist candidate for local office, she is better known as Brazil’s most enduring sex symbol. Wisely eschewing politics in favor of the kind of material that will interest her legions of fans, Toni Venturi’s documentary profile Rita Cadillac—the Lady of the People (trailer here) played to appreciative audiences at this year’s Cine Fest Petrobras Brasil in New York, which concludes tonight with a free screening of Oscar Niemeyer—Life is a Blow in Central Park.

Cadillac (no, that is not her real name, and yes, there was also a similarly named French dancer at the Folies Bergére) first came to national prominence as a “Chacrete” dancer on a popular variety show, sort of the Brazilian equivalent of a Solid Gold dancer. As her following grew, she accepted movie roles and developed her own go-go dancing touring revue. Recalling life on the road, Cadillac clearly regrets accepting a booking at the remote Serra Pelada mining camp, where things got a bit tense with the lumpenproletariat audience. However, she has nothing but fondness for the many prison shows that made her the risqué god-mother to Brazil’s inmate population. 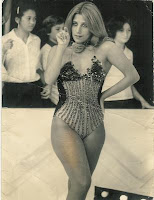 turi employs the tried and true conventions of documentary filmmaking, including talking head interviews, archival television footage, and candid scenes of Cadillac and her friends and family, the events of her life are certainly memorable. Undeniably a survivor, she comes across as quite likable and engaging. It probably helps that Venturi scrupulously avoids politics, clearly favoring the naughty bits that would please her legions of fans.

Lady is a generous shot of Brazilian pop-cultural history that would be hard to glean from other more staid sources. It moves along briskly and delivers what her adoring public wants. It was a good fit for the Cine Fest Petrobras Brasil, which concludes tonight with their free concert and screening at Central Park’s Summer Stage before moving on to Vancouver.
Posted by J.B. at 11:31 AM