Compared to Shinya Tsukamoto’s metalized humanoids, Iron Man is downright gentile. They also make the Marvel hero seem completely believable and multi-dimensional. Harsh and grungy, Tsukamoto’s Tetsuo series has a small but devoted cult following. To expand the audience, Tsukamoto filmed the latest in English. Yet, it is hard to imagine Tetsuo III: The Bullet Man (trailer here) expanding beyond the hardcore faithful when it opens this Friday in New York at the IFC Center.

Raised in Japan by his expat parents, Anthony now has a family of his own. Everything seems ideal, but premonitions of his young son Tom’s premature death are fraying his wife Yuriko’s nerves. When her dreams tragically come to pass, it profoundly threatens their union. Yuriko is particularly aggravated by her husband’s steadfast refusal to show emotion. However, when he finally gives vent to his anger, it is not pretty. In fact, it triggers a nightmarish metamorphosis.

Suddenly, Anthony is a hulking metallic humanoid weapon. Obviously, Tom’s death was no accident, but part of a deliberate plan to trigger whatever was hardwired inside his father, with our first clue being the renegade army trying to corral the metallic Anthony. It also quickly becomes clear this painful process somehow involves his father Ride’s dodgy arms research.

Frankly, there are long stretches in Bullet where it is truly impossible to tell wtf is going on. Tsukamoto’s shaky-cam action sequences are so blurry and disorienting they are likely to induce nausea and even seizures. They make the Transformers movies look like the opening tracking shot from Orson Welles’ Touch of Evil. Since it is often impossible to follow the chaos on-screen, viewers will find themselves worrying over the huge logical holes in the film’s plot. Like, wouldn’t it make more sense to kidnap Anthony first and then induce his transformation, rather than vice versa? Whatever.

It is hard to judge Eric Bossick’s work as Anthony, considering how much time he spends buried under bizarre prosthetics. At least, Akiko Monô provides a measure of humanity as Yuriko. In fact, Bullet features a few promising human villains, including the director reprising his role as the banally evil “metal fetishist,” as well as Stephen Sarrazin’s smart, sophisticated, and morally ambiguous Ride. However, too much of the conflict boils down to the new Anthony bashing faceless paramilitaries (if that is indeed what was happening).

Nearly a one-man band, Tsukamoto is most successful designing the cold concrete and steel environment of Bullet. Though shot in color, audiences may well remember it in black-and-white. It is also 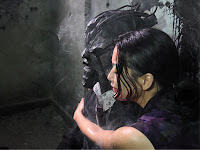 notable for the closing industrial theme composed by Trent Reznor, an odds-on favorite to pick up an Oscar for his score to the vastly dissimilar Social Network.

Bullet is a film in desperate need of clarity. Certainly, it reflects a distinctive aesthetic, but the execution is so problematic, it does not even earn a fanboy recommendation, not it matters to the diehards. Good luck to them when Bullet opens this Friday (1/21) at the IFC Center.
Posted by J.B. at 3:00 AM