Finnish No Man’s Land: Into Eternity

Developing reactors that recycle nuclear waste is one of the research areas Bjorn Lomborg recommends to tackle global warming and save the planet. Finland is not waiting for anything so pie-in-the-sky. They are taking a state-of-the-art approach to one of the oldest strategies for making inconvenient things disappear. Essentially they are burying their nuclear waste in their backyard, about over 1,700 feet deep, in a stainless steel temple known as Onkalo. If all goes according to plan, humanity will never set foot in Onkalo again once it becomes operational, making Danish filmmaker Michael Madsen’s tour of the facility a rather eerie experience in his meditative documentary Into Eternity (trailer here), which opens this Wednesday at Film Forum.

Onkalo is meant to last 100,000 years. Considering the Iron Age was only just commencing in Europe approximately 3,200 years ago, this is constitutes a really long time. Within that span, civilizations could rise and fall several times over and written communication may well morph into something completely unrecognizable. Such matters directly concern those responsible for designing Onkalo’s “danger: keep out” signs.

Actually, some of Eternity’s speculative issues expressed by Onkalo’s ethical advisory team seem slightly overwrought. Any people enterprising enough to burrow that deep into the Earth ought to be able to puzzle out the voluminous warnings in multiple languages. However, what really works in the film is its man-standing-on-the-dark-side-of-the-moon vibe. Like an enormous secret installation straight off the page of a comic book, rendered in ultra-modern Ikea style, there is a genuine otherworldliness to Onkalo, perfectly captured by Heikki Färm’s cold, glossy cine 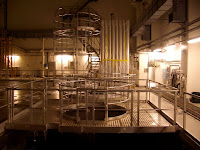 Produced with dispassionate coolness by a Danish filmmaker documenting a Finnish undertaking, Eternity might be the quintessential Scandinavian documentary. While the “arrogance of man” message is somewhat overstated, it takes viewers to someplace they have truly never been before, and its creators ardently hope, will never go again once they seal it up. An intriguing film (though a bit brief at seventy five minutes), Eternity opens this Wednesday (2/2) in New York at Film Forum.
Posted by J.B. at 12:00 PM