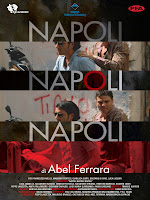 It was the seat of its own Renaissance-era kingdom and a cultural center of the Roman Empire. Yet, amid a country of former city-states, Naples has been largely left behind. Abel Ferrara returned to his ancestral roots to witness how far the once glorious city has fallen in his hybrid documentary Napoli Napoli Napoli (trailer here), which screens this Saturday as part of Anthology Film Archives’ Abel Ferrara in the 21st Century series of the director’s recent unreleased or under-distributed films.

Collaborating with screenwriter-producer Gaetano Di Vaio, a former criminal turned filmmaker, Ferrara set out to interview some of the women and young men of the Pozzuoli prison, interspersing their traditional documentary footage with dramatic vignettes inspired by the convicts’ experiences. Certainly the most substantial would be Di Vaio’s story of two Camorra gangsters taking on a friend on a road trip to his eventual execution—an an episode reportedly based on his own life.

Frankly, thin would be a generous description for most of the original narrative sketches, and frankly they are not really necessary. Ferrara vividly captures of a sense of the squalid life on Naples mean streets and elicits more compelling testimony from his interview subjects. He shows an intuitive understanding of those profoundly unlucky to have been caught up in the Neopolitan web of drugs and vice. Though his interviewing skills in Chelsea on the Rocks often seem somewhat suspect, here he shows a knack for asking probing questions, simply and directly. In the case of a Nigerian immigrant lured into the drug trade, he asks how she feels about Italians. He also asks several young inmates if they have ever read a book. Of course, the 64,000

Euro question is whether they think the Camorra has been good or bad for the community.

Napoli 3 even has a hero or two, like the dedicated social worker and an elderly business man who refuses to pick up stakes and leave town. However, the film is not particularly sanguine about the region’s future. The local politicians certainly do not have any answers, though they do their best to point their fingers at the national government. Evidently, personal responsibility will not be starting with Naples’ elected leaders. Despite its odd combination of filmmaking strategies, it is a sobering look at a once great city’s decay that would be a good companion film to Matteo Garrone’s Gomorrah. It screens during AFA’s 21st Century Ferrara retrospective January 8th, 9th, 13th, 15th, and 16th.
Posted by J.B. at 3:00 AM