How hip a blues guitarist was Sister Rosetta Tharpe? Well, she was one of the primary influences on a kid from Tupelo, Mississippi named Elvis. Yet, she was not really a blues or R&B artist, but a Gospel singer. By profiling trailblazers like Tharpe, director Don McGlynn and producer Joe Lauro celebrate the rich legacy and diversity of American Gospel music in Rejoice and Shout (trailer here), which opens this Friday in New York at Film Forum.

Rejoice opens on a true high note, as a young member of the Selvy Family of Gospel singers belts out a powerful old-time religion rendition of “Amazing Grace.” The film then proceeds to backpedal, explaining where the music came from. Yes, it is rooted in the plantation experience of African Americans, but the story of Gospel’s development is more complicated, involving entrepreneurial figures like Thomas A. Dorsey. A reformed bluesman, Dorsey penned and promoted scores of Gospel standards, often popularized through performances by the great Mahalia Jackson.

Frankly, it is pleasantly surprising how intelligently Rejoice addresses the actual music. It is particularly effective illustrating the complexity of the arrangements and the syncopated jazz influences of the vocal ensembles like the Golden Gate Quartet. More to the point, many people will probably be surprised how much fun this legitimately sacred music truly is.

Of course, the music is the thing in Rejoice. To their credit, McGlynn and Lauro unearthed some remarkable rare footage, ranging from sound film that predates Al Jolson in The Jazz Singer to some totally cool video of the Edwin Hawkins Singers performing “Oh Happy Day” during a stadium concert. Still, Rejoice never forgets the music’s raison d’être, allowing former 1970’s Gospel superstar turned everyday preacher Andraé Crouch the time and space to speak eloquently of the glory and power of God.

Unfortunately, Rejoice largely runs out of steam once it hits the 1980’s, following Crouch’s main segment. Arguably, the more contemporary fusions of Gospel and pop lack the power of the previous seventy-some years and the artist profiles are more perfunctory, but that is quite late in the film. McGlynn also tosses up a partisan airball with the already clichéd conclusion of Obama triumphalism, cheapening an otherwise admirable survey of some genuinely stirring music. 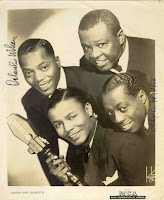 Despite some third act slack, Rejoice is an entertaining and educational music documentary. In addition to Gospel devotees, jazz, blues, and soul fans will also find much to enjoy in the music and in the way it is presented. Quite well assembled overall and rather swinging, Rejoice is indeed recommended when it opens this Friday (6/3) at New York’s Film Forum.
Posted by J.B. at 3:00 AM