Music and Textiles: A Weaverly Path 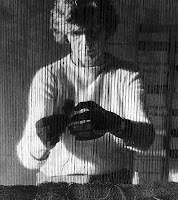 As a child, the Swiss-born Silvia Heyden shared meals with refugees from National Socialist Germany and would later cross over from East to West Berlin just as the wall was nearly completed. Yet, the greatest inspiration for her innovative tapestries has been the Eno River in peaceful Durham, North Carolina. Heyden’s life and work are profiled in Kenny Dalsheimer’s A Weaverly Path (trailer here), which screens this coming Tuesday at the Missouri History Museum.

Heyden might be the tapestry artist of her time, period. Never merely adapting pre-existing paintings from canvas to textile, Heyden conceives each piece specifically for her medium. Thread by thread, her kinetic forms takes shape on her loom. They do not always hang straight, but her use of color and form are always intriguing.

Though we do observe Heyden’s methodical work up-close, unlike Sophie Fienne’s slow-going Over Your Cities Grass Will Grow, Weaverly never assumes watching an artist quietly putter about their studio for long stretches of time is sufficiently explanatory or engrossing. In fact, we hear Heyden give her basic primer on tapestry as an art form, which should deepen viewers’ appreciation not just of her work, but of her medium in general.

Though rarely heard on-screen, Dalsheimer draws out the artist quite deftly. He clearly establishes her influences, including a supportive father (himself a frustrated artist) and a Bauhaus education, without driving each point into the ground. Rivers are also important touchstones in her life, with Rhone prefiguring the Eno as a source of inspiration. Yet, music is nearly as significant as nature in shaping her art. In fact, her two arguable masterworks, Passacaglia and Chaconne, directly reference the baroque music she still plays with her string ensemble.

Appropriately enough, Weaverly has a beautiful soundtrack, consisting largely of music licensed from the Brooklyn-based AUM Fidelity label (in addition to Heyden’s own playing) that impeccably matches the film’s striking visuals and contemplative mood. Particularly effective are the selections from jazz pianist-composer Eri Yamamoto, including “Circular Movement,” a duo recording with Hamid Drake that perfectly evokes the rhythms of Heyden’s loom. Originally conceived as a part of a new soundtrack for Yasujirō Ozu’s silent classic I Was Born But . . ., the jaunty “A Little Escape” also helps propels the film along nicely, while the richly melodic “Thank You” (another duo track, with Federico Ughi) establishes a relaxed but sophisticated vibe.

Artfully crafted in its own right, Weaverly is one of the more accessible and engaging art documentaries currently on the festival circuit (featuring one of the best soundtracks). Recommended for its sights and sounds, as well as Heyden’s smart, likable presence, Weaverly screens Tuesday afternoon (9/13) as part of the Missouri History Museum’s History on the Side series, where its sixty-two minutes will be worth stretching St. Louisans’ lunch hours.