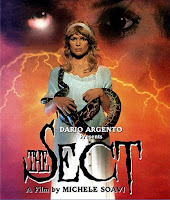 It was a real dream team that came together for this early 1990s Italian horror film—one you really couldn’t reassemble anymore. It was directed by Dario Argento’s protégé Michele Soavi and produced by his famous mentor. It co-stars the late great Herbert Lom, no stranger to horror cinema, and Jamie Lee Curtis’s sister Kelly. The score was composed by Pino Donaggio, who is justly celebrated for his collaborations with Argento and Brian de Palma and it was ushered in to world with the support of Silvio Berlusconi Communications. Thank you, Mr. Prime Minister, and good night. Together, they gave us the feverish house of satanic horrors that is Soavi’s English-language The Sect, a.k.a. The Devil’s Daughter, a.k.a. Demon 4, which releases today on Blu-ray, from Scorpion Releasing.

In the 1970s prologue, a camper full of dirty California hippies gives hospitality to the wrong Rolling Stones-quoting, Charlie Manson-looking counter-culture creep. That would be Damon, the head of the satanic conspiracy’s American division, who is about to sacrifice his hosts to his big boss downstairs. The visiting Moebius Kelly, the European-based chief of the entire global operation, is quite pleased, but still consoles patience.

Two decades later, Kelly’s evil spirit is still willing, but his body is failing. It does not help when expat school teacher Miriam Kreisl nearly runs him down with her car (honest, she just missed him). Displaying incredibly poor judgement, she takes Kelly back to her house to recuperate. It is comfy bungalow with a finished basement—you know, mystical cult runes on the walls and a gateway to Hell at the bottom of an ancient well. Bizarrely, she never looked down there until the weird things started happening (seriously, she couldn’t use the storage space?).

The Sect or whatever you want to call it is a wonderfully over-the-top exercise in demonic horror, with an element of social paranoia thrown in for good measure, a la Rosemary’s Baby.  Cinematographer Raffaele Mertes gives it a wonderfully lurid, Giallo-worthy look, while Kreisl’s sinister subterranean cellar is a marvel of production and set design.

Kelly Curtis is actually a credible and engaging horror-movie-woman-in-jeopardy, even though some of her character’s decisions induce audible face-palming. Of course, Lom chews the scenery like the old pro he is as the creepy Moebius. However, Tomas Arana might be even creepier Damon, the sadistic devil-worshipping hippie (weren’t they all).

The Pact is not an all-time horror classic, but it is not from a lack of trying. This film goes nuts six ways from the black sabbath, which makes it jolly fun to watch. Recommended for fans of Italian horror in its many varieties and all the famous names involved (except maybe Belusconi), The Sect releases today (2/27) on Blu-ray, from Scorpion Releasing.
Posted by J.B. at 6:00 AM