Rather surprisingly, Iran leads the world in per capita rhinoplasty. It maybe isn’t what the martyrs died for during the revolution and the Iran-Iraq War, but they indirectly contributed to it. When you are forced to wear the chador, suddenly your nose becomes much more important to your self-esteem. However, Mehrdad Oskouei was somewhat baffled by the number of young Iranian men also getting nose jobs when he set out to investigate the phenomenon in Nose, Iranian Style, which screens as part of Documentary, Iranian Style at Anthology Film Archives.

Compared to his other films about juvenile delinquents and gender iniquities in provincial Iran, Nose is definitely a lighter film from Oskouei. Yet, he still has he same calm, reassuring style as an interviewer that gets his subjects talking like old friends. If they ever franchise Kids Say the Darnedest Things in Iran, he would be the logical candidate to host. Nevertheless, he still offers some trenchant social observations.

Basically, Oskouei and some of his commentators see this trend as a by-product of a vacuous (and highly censored) pop culture that holds little interest for younger generations, who also feel alienated from political and religious authorities. There is indeed also the issue of women who want to look good in the deeply resented chador. 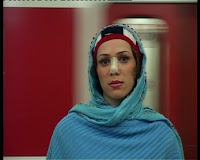 Still, it seems younger Iranians just have it in for the nose. Oskouei talks to a number of pre-teens who just can’t wait to go under the knife. They all seem to think he and his crew could use some work too. Of course, this isn’t without discomfort, expense, and even risk.

Watching Nose, it is clear there are some really attractive young Iranians, who need plastic surgery like they need emergency ice shipments in Antarctica. Those Green Wave demonstrations must have been quite a happening (and what a pity they were so harshly crushed). Apparently, you have to do something to pass the time, when free expression and unfettered political participation are not available (granted, that is not exactly how Oskouei puts it). Deceptively light-hearted and ultimately quite fascinating, Nose, Iranian Style screens with the short doc Maryam of Hengam Island this Saturday (2/24) and Sunday (2/25), as part of Anthology’s Oskouei retrospective.
Posted by J.B. at 6:00 AM