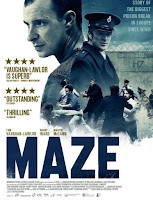 IRA member Larry Marley was shot down in retaliation for the murder of loyalist John Bingham and the Provisionals duly responded by killing loyalist William “Frenchie” Marchant as payback. You can definitely say he was enmeshed in a tragic circle. Frankly, prison was probably the safest place for him to be, yet he masterminded the IRA’s most notorious prison break. The careful planning and execution of the escape gets the big screen treatment in Stephen Burke’s Maze (trailer here), which screens during the 2018 SF Indie Fest.

Her Majesty’s Prison Maze no longer stands, but in the early 1980s, it was a maximum-security prison for both IRA and UVF militants, which often led to some tense confrontations in the corridors. Marley participated in the 1981 hunger strike, but reluctantly ended his fast. Feeling guilty, he struck on the notion of a large-scale escape as a way to boost morale. However, most of the IRA prison leadership initially dismisses the scheme as unrealistic.

Nevertheless, by agreeing to do prison chores (contrary to the hunger strikers’ demands for special privileges), Marley starts to get a comprehensive picture of the Maze’s security systems. By currying favor with Gordon Close, a frazzled warder who recently survived an assassination attempt, Marley picks up on little flaws to exploit. However, he also starts to begrudgingly respect his jailer as a fellow father and human being.

In fact, the film rather backhandedly suggests the greatest flaw in Maze security were the British guards, who were too humane in their treatment. Like they say, no good deed. Of course, it is rather tricky, maybe even perilous, to make a Troubles film in the delicately balanced post-Good Friday era. Yet, Burke pulls it off by giving hints Marley could envision an era of peaceful coexistence, but he had to maintain his IRA street cred in the meantime. Whether or not it is historically accurate, it makes it easier to spend time with him as our focal character.

Still, Tom Vaughan-Lawlor is so realistically twitchy and clammy as the tightly-wound Marley, it almost undoes all of Burke’s efforts to humanize him. On the other hand, Barry Ward does some of his best work yet, aching and brooding as harried and alienated Close. Their “friendship” has no big TV movie moments. It is a rather circumspect and restrained business, but we still totally believe it when Marley appears distressed to see him covering for another warder on D-Day.

There is some satisfying jail-breaking action, but Maze is unusually even-handed and well-spoken for a historical prison movie. Burke never gins up resentment against the warders with manipulative beating scenes. He also makes it clear one guard is ultimately murdered during the course of events, probably gratuitously. Arguably, Maze is about as de-politicized as it could be, while still openly inviting us to sympathize with the escape-planners (and seeking Irish box office returns). Recommended as a nicely-staged prison-escape film, Maze screens tonight (2/11) and Thursday night (2/15) as part of this year’s SF Indie Fest.
Posted by J.B. at 6:00 AM