Mehrdad Oskouei at Anthology: The Other Side of the Burka 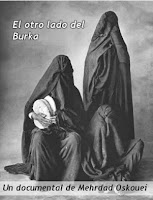 The tight-knit Islamist villages dotted along Iran’s southern coast look extreme even to many Revolutionary true believers throughout the rest of the country. Down there, the chador is not sufficient. Women must wear Burkas. At least it is the Gulf-style metallic mustache-guard burka rather than the completely encasing version preferred in Afghanistan, but if you think it is so comfortable than why don’t you start wearing one? The women who live there are desperate, miserable, and bereft of hope, judging from the interviews Mehrdad Oskouei conducts in The Other Side of the Burka, which screens as part of Documentary, Iranian Style, a new retrospective of the documentarian’s work starting this Friday at Anthology Film Archives.

The catalyst for Burka was the suicide of a long-suffering wife and mother named Samireh. Ironically, she seemed to be in better spirits than many other women, but there is no secret why she did what she did. The words of her widower husband speak volumes: “As the saying goes, women are like footwear, if you lose one, you can easily obtain another. But, what am I to do with my children?” Well, maybe he could consider stepping up and taking responsibility, but we’re just spit-balling here.

In any event, that pretty much says it all, doesn’t it? Oskouei quickly establishes what social conditions are like. Women are married off early in this region—thirteen-year-old brides are not uncommon in the community. They are forced to have many children, but their husbands often have difficulty supporting their families. On the flip side, when times are good, the men often take younger second wives. 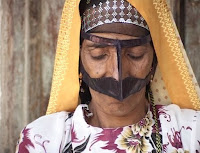 Oskouei records one harrowing story after another chronicling physical abuse, mental cruelty, and perverse attempts to induce abortions. The filmmaker tries to show the men some compassion too, explaining how over-fishing forced many fishermen to resort to smuggling, running a very real risk of arrest and imprisonment to feed their families. Yet, it is as obvious as the burka on your face they would be much better off if they married women who were somewhat older and allowed them to complete their education and pursue employment outside the home.

Again, it is striking how completely these women trust Oskouei. They have difficult stories to tell, especially to an Iranian man, yet they give him shockingly intimate testimony, on-camera. They are brave to reveal so much, but he was also pretty gutsy to expose the systematic injustices they continually endure. It clocks in at an economical fifty-two minutes, but it says plenty in that time. Very highly recommended, The Other Side of the Burka (paired with Oskouei’s documentary short, My Mother’s Home, Lagoon) screens this Friday (2/23) and next Monday (2/26) during the Mehrdad Oskouei retrospective at Anthology Film Archives.
Posted by J.B. at 6:00 AM