Hector is becoming more human. He was a workplace safety inspector and now he is a zombie. It’s definitely an improvement. After years of bullying companies, he now finds himself at the bottom of the monster pecking order. However, Hector might just finally organize the passive walking dead in Arthur de Pins & Alexis Ducord’s Zombillenium (trailer here), which screens during this year’s New York International Children’s Film Festival.

As a widowed single father, Hector has not been doing right by his daughter Lucie. After promising to take her to the all-too-real monster-themed amusement park Zombillenium, he tries to wriggle out of it by shutting it down with workplace safety citations. However, the park’s general manager, Francis Von Bloodt will not stand for that, so he kills Hector and remands him into Zombillenium service as a zombie.

Oddly enough, it turns out Hector makes a good zombie. Thanks to his contributions, the zombie attractions start to gain popularity at the vampires’ expense. With the exception of the sympathetic Von Bloodt, this new turn of events does not sit well with the blood-suckers, so they start plotting, because they are monsters after all. Meanwhile, Gretchen the Nine Inch Nails-listening intern-witch (whose father is rumored to be quite an infernal one) will try to facilitate a reunion between the embattled Hector and his grieving daughter.

De Pins and Ducord cast the zombies-versus-vampires struggle in unsubtle class warfare terms, yet the militant labor rights messaging rather clashes with wonton abuse of government regulatory power displayed by Hector while still in human form. At least nobody sings “The Internationale,” but the filmmaker clearly would not mind if little ones in the audience jumped up to yell “¡no psaran!,” while pumping their fist. It’s a shame, because it drags down the fun quotient of an otherwise charming animated film. 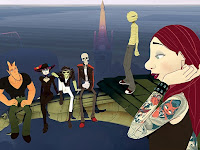 If you can overlook the forays into propaganda, Zombillenium is an entertaining monster movie that tweaks the traditional legends and movie conventions in clever ways. The father-daughter relationship is rather sweet and touching, while the ambiguous chemistry that develops between Hector and Gretchen pays off nicely.

As a side note, Zombillenium had its only 3D screening at the festival last Sunday. Ordinarily, we consider 3D an underwhelming cash-grab, but in this case, it works unusually well. A good deal of the story involves the park rollercoaster and Gretchen’s witchboard, so there is all kinds of swooping and swooshing, which makes for a richer, fuller 3D experience than someone pointing a sharp stick at the camera.

Zombillenium is definitely a film for older kids, because there are some intense scenes, including the downtrodden zombies laboring like Sisyphus on the Conan wheel in H-E-double hockey-sticks. However, fans who know their Famous Monsters of Filmland and Drak Pack will get a kick out of seeing the classic monster archetypes updated for the postmodern era. Recommended despite its didactic excesses, Zombillenium screens again in 2D this Saturday (3/17), as part of the 2018 NYICFF.

Patrons of French cinema might also be interested in Jean-Pierre Jeunet & Romain Segaud’s Two Snails Set Off, a three-minute animated adaptation of the Jacques Prévert poem. It is more about creepy-crawly critters than creatures, but it displays the same Baroque-level of detail seen in Jeunet’s features, such as Delicatessen. It also features the voice talent of a platoon of famous French screen thesps, including Audrey Tatou and Irène Jacob. Brief but still recommended for the auteur’s fans, Two Snails screens as part of the Heebie Jeebies short block this Sunday (3/18).
Posted by J.B. at 7:00 AM