Jean-Louis Trintignant had plenty of work in Italy (like The Conformist and Death Laid an Egg), but they usually dubbed the iconic French actor. Not in this case. The man Trintignant plays is not known as Silence (Silenzio) for no reason. His vocal chords were sliced as child to prevent him from identifying his parents’ killers. He will have a chance for some payback in this snowy Spaghetti Western, but justice is a just as frozen as the landscape in Sergio Corbucci’s The Great Silence (trailer here), which opens its long belated U.S. theatrical run this Friday at Film Forum.

Silence deserves its reputation as one of the darkest Spaghetti Westerns ever. Corbucci’s Django was not exactly Pollyannaish, but the producers of Silence forced him to film a cheerful and tidy alternate ending for the American market. As it turned out, there was no American market, so it remained unused—and do not go in expecting it now. Instead, there will be snow and death.

Utah, 1899. The state is about to be buried under the great blizzard and they are already plagued by rogue bounty hunters. The new governor has pledged to pardon the outlaws forced into the hills by the usurious banker and justice of the peace Henry Pollicut, but until the legalities are formalized, the swarms of bounty hunters will continue to shoot first and drop off the body for payment later.

Loco is the worst of the worst. His latest victim was African American outlaw James Middleton, whose wife Pauline is of particular interest to Pollicut. Instead of submitting, she recruits the wandering gunman known as Silence to avenge her husband. Silence has a knack for goading his prey into drawing first, allowing the shootist to blast them to their eternal judgement with no fear of prosecution. However, Loco understands his M.O.—and will seek to exploit it.

Supposedly, Silence is set in Utah (filmed in the Dolomites), but it has a decidedly Euro vibe. Partly it is due to Ennio Morricone’s soaring score, which sounds closer to Michel Legrand than his iconic Dollars trilogy themes. The pessimism and fatalism are also very European (seriously, how hard can it be to solve the bounty killer problem—just stop paying bounties). 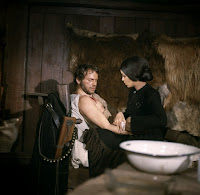 Regardless, Trintignant is surprisingly hardnosed and badassed as Silence. Vonetta McGee (best known for blaxploitation classics like Melinda, Hammer, and Blacula) is terrifically fierce as the widow Middleton, while Klaus Kinski is supernaturally slimy as Loco. However, the late Frank Wolff is the unexpected X-factor, portraying Sheriff Gideon Burnett as a reluctantly righteous, decidedly un-shticky secondary hero figure.

Weird crippling and hobbling themes run throughout both Great Silence and Django. Antagonists are not merely beaten or killed. They are emasculated and broken. That makes both films grist for Freudian analysis, but Silence is also a feast for the eyes, thanks to Silvano Ippoliti’s dramatically stark widescreen cinematography. The result is a Spaghetti Western that is both a compelling morality play and an idiosyncratic oddity. Highly recommended for western fans in the mood for something darker and different, The Great Silence opens this Friday (3/30) in New York, at Film Forum.
Posted by J.B. at 3:00 AM