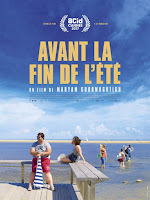 Ah, home sweet oppressive regime. Iranian expatriates like these three grad students have a complicated relationship with their homeland. As one puts it, he feels more at home in Iran, but he is more like the person he wants to be in France. When one of the trio decides to return home, his two mates convince him to take one last (or rather first) road trip together in Maryam Goormaghtigh’s Before Summer Ends (trailer here), which screens during the 2018 Rendez-Vous with French Cinema.

Arash is a big fellow, who was apparently spoiled by his family in Iran. Perhaps not surprisingly, Ashkan and Hossein adapted better to life in Paris, especially the latter, who married a French woman. When Arash announces his plan to return, his friends try to talk him out of it, yet they obviously understand his decision. Nevertheless, they will have one last hurrah of easily accessible beer and wine, while camping out and carousing along the French Riviera.

Reportedly, Goormaghtigh originally intended to make a documentary about the refugee experience (because there are hardly any of those already), but the three expat friends just captured her filmmaking enthusiasm. Indeed, it is quietly compelling to watch them navigate their in-between expatriate existences: not citizens, not asylum-seekers, not illegal aliens, nor stateless fugitives.

Although filmed direct-documentary-style, Before often has the feel of a chatty Richard Linklater indie-road-comedy, especially when two French indie-rockers start tagging along. However, serious issues are always percolating right below the surface. In fact, we eventually learn Arash is not the only one who will have to make hard-and-fast residency decision.

The trio, simply credited as Arash, Ashkan, and Hossein (which is telling in itself), crack their share of scatological jokes, but they also have some shrewd insights to offer. Perhaps the resemblance between the geography of the south of France and the north of Iran put them in a conducive head-space. In any event, we certainly feel like we know them when the film finally runs its course.

Before Summer Ends is a small film, but it has some wry nuggets of wisdom to offer. Considering how much they enjoy their potent potables, it is hard to imagine the three amigos could re-acclimate to life in contemporary Medieval Iran, but they themselves suggest they are very different people in their native country. Recommended for those in the mood for a lowkey film that still has substance, Before Summer Ends screens tomorrow afternoon (3/17), as part of French Rendez-Vous ’18, at the Walter Reade.
Posted by J.B. at 3:00 AM