NYAFF ’18: We Will Not Die Tonight

Action cinema doesn’t get much grittier or zeitgeisty than this. At one point, the leader of an organ trafficking ring suggests the current government in Manila would be fine with them preying on poor slum-dwellers—and it is hard to argue with him. However, Kray is pretty darned appalled. The under-appreciated stunt performer and her punky friends will fight for their lives and the life of an innocent in Richard Somes’ street-to-the-max We Will Not Die Tonight (trailer here), which screens during the 2018 New York Asian Film Festival.

Even though she is usually taken advantage of on-set, Kray still makes more money performing stunt work than catering. She needs it for her ailing father, who was also a stuntman during the run-and-gun Roger Corman glory years (but it took a toll on his body). That is why she and the rest of her former juvenile delinquent gang are willing to come together for a reunion gig arranged by their flaky leader Ramil.

Of course, everyone is slack-jawed shocked to learn Ramil’s old neighborhood pal Bangkil wants them to kidnap kids off the street, so their organs can be harvested. Even slimy Ramil wants no part of that, but Bangkil doesn’t take no for an answer. So, Kray and her mates grab little Isabel, a missing girl currently in the news and hide in an abandoned industrial building, where a spectacularly bloody game of cat-and-mouse will play out.

Holy cats, Somes really isn’t dorking around here. You will probably feel like getting a tetanus shot after watching it. Frankly, Atomic Blonde looks downright genteel in comparison, like afternoon tea and crumpets.

If you want yourself a feminist action figure than Kray will knock your socks off. Previously known for squeaky clean rom-coms, Erich Gonzales completely explodes her old image with her remarkably intense and unrelentingly physical performance as Kray. Yet, she is not a super-woman. In fact, she shows tremendous sensitivity and vulnerability. Max Eigenmann drastically plays against type in a similar fashion as the every-punk-for-themselves Cheche. 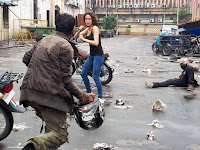 Alex Medina aptly portrays Ramil as too slick for his own good, but he is also totally convincing as the walking wounded getting the heck sliced out of himself. Thou Reyes and Nico Dans nicely round out the gang as the strongly delineated Jonesky and Rene Boy. In contrast, most of the organ trafficking villains could have had their sinister idiosyncrasies emphasized and exaggerated more.

Regardless, the pedal-to-the-metal action and overpowering vision of urban anarchy will completely hypnotize most viewers. Think of We Will Not Die as the Filipino analog to Judgement Night, if the early 1990s thriller had more martial arts and less copping out. Even though it was only shot in eight days, We Will Not Die represents some truly virtuoso indie filmmaking on Somes’ part. Twenty years ago, it would have sparked a bidding war among indie distributors, but it is doubtful the surviving players can handle a film with this kind of naturalistic honesty and pure genre menace. Highly recommended for grown-up action fans, We Will Not Die Tonight screens Friday night (6/29) at the Walter Reade, as part of this year’s NYAFF.
Posted by J.B. at 7:00 AM