The Midnight Man: Robert Englund and Lin Shaye, Together Again 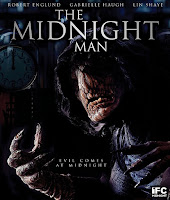 Can someone please explain where’s the fun in summoning a boogeyman, when you know it will be an ordeal to survive, if it ever shows up? Yet, kids seem to try it all the time, especially in horror movies. This sinister nocturnal visitor the latest in the dubious tradition of Candyman and the Bye Bye Man, but he seems to have a strange connection to Anna Luster and her family. Her granddaughter Alex is in for a heck of a long night in Travis Zariwny’s The Midnight Man (trailer here), which releases today on DVD.

According to the so-called “Midnight Game” Anna and her soon-to-be late brother played during the 1953 prologue, once you summon the Midnight Man, at 12:00, you must keep your personal candle burner or step inside a protective circle of salt until 3:33 AM, or the evil entity can get you. He doesn’t merely kill. The Midnight Man torments his victims to death, using visions of their greatest fears. He also cheats.

So yeah, super-fun game—yet for some reason Anna Luster kept playing it over the years. She is now rather infirm and mentally erratic. Frankly, she is lucky her granddaughter Alex took time off to care for her, but alas, that also means the twentysomething and her ambiguous guy pal Miles will inevitable stumble across the game (basically some candles and a vial of salt) in the attic. Of course, once they find the creepy rules, they inevitably start playing, for no conceivably rational reason.

The Lusters are also lucky her personal GP (and childhood friend), Dr. Harding and his physician’s assistant make house-calls during the dark of night—both of them. Of course, his spider sense tells him something is not right. Alex and Miles’ pal Kelly also joins the game, because she her goth lifestyle will give her special survival insights. Right, good luck with that.

Apparently, Midnight Man is a fairly faithful remake of an Irish film that was never released in America, so who knows, maybe it is a hidden horror gem. The main appeal of Zariwny’s film is the presence of horror legends Lin Shaye and Robert Englund. Unfortunately, Anna Luster is not such a flattering role for Shaye that really isn’t that much different from her character in the deliriously unhinged The Black Room.

On the other hand, Englund is wonderfully sly as Dr. Harding. His fame rests on his work playing iconic monsters like Freddy Krueger, but in recent years he has transitioned into something like a contemporary Peter Cushing in films like Nightworld and The Funhouse Massacre, which totally works for us. His scenes in Midnight Man at least ten times more entertaining than the rest of the film.

Gabrielle Haugh (as Alex) and the rest of the poor man’s Scooby-Doo Mystery Team are serviceable but never all that memorable. At least the spooky grand old house is all kinds of atmospheric. It is not great, but it reconfirms our well-placed confidence in Englund. Strictly for his hardcore fans, The Midnight Man releases today on DVD and BluRay.
Posted by J.B. at 5:00 AM