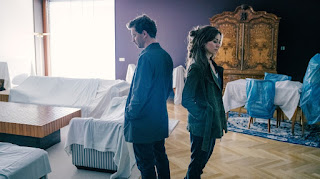 For obvious reasons, art collections with iffy provenances acquired during the early to mid-Twentieth in Germany will arouse suspicions. Such is the case with the Magnus Dutt collection. The elderly eccentric is quite secretive regarding his holdings, but Philipp Keyser’s employers are convinced he has a rare painting only recorded in rumor and vague second-hand reports. They will retain him to acquire the painting, by hook or by crook, However, he will get more than he bargained for when he tries to get to Dutt through his artistically tempered niece in Dominik Graf’s Twilight Eternal (a.k.a. At the End of Time), which screens during the Graf retrospective at Anthology Film Archives.

Keyser is told acquiring the painting in question is a matter of justice for the firm’s client. He is not wildly concerned about such matters. For him, it is a potentially chance to return full time to the Grisham-sounding “firm.” The idea is to cozy up to his great-niece Alma, a defiantly unmarketable artist in her own right, who will then introduce him to the old man. Maybe she will and maybe she won’t. Regardless, she does not seem very put off when she learns their romance is based on mercenary motives. Their relationship might not be the healthiest, but on the other hand, these two could really be perfect for each other.

Eternal (or End of Time, or Am Abend Aller Tage) is another Graf TV movie that has garnered more than typical screenings and ancillary interest outside Germany. Most likely it is due to its wink-wink source material: the notorious case of the real-life Gurlitt Collection, as refracted through Henry James’ The Aspern Papers. It also happens to have some interesting things to say about the nature of art and its appreciation.

However, the presumed charms of Friedrrich Mucke’s Keyser are rather lost on this reviewer. Whereas Victoria Sordo’s Alma, the Miss Tina analog, is a far cry from a Plain Jane, she certainly has issues. They definitely have convincing sexual tension and dysfunctional (but still potent) chemistry together on-screen, Yet, Ernst Jacobi frequently steals the show as Dutt, whose connection to his collection runs deeper than mere investments.

Again, Graf helms with greater style than viewers usually expect from the term “TV movie.” It is more engaging intellectually than on an emotional level, but that is not necessarily a bad thing. Frankly, anyone intrigued by its literate but cynical take on the gallery business and of-the-moment contemporary art should see it during the Graf retrospective, because it probably will not be back around anytime soon. Recommended accordingly, Twilight Eternal screens today (5/25) and Wednesday (5/29), at Anthology Film Archives.
Posted by J.B. at 6:00 AM