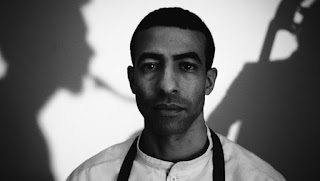 Jazz tunes named after food tend to be greasy toe-tappers, like “Beans and Greens” and “Fried Neck Bones and Some Home Fries”—usually soul jazz and soul food. Tarts and soufflés, not so much. As a result, Milton Abel II crossed over into an entirely different world from his Kansas City jazz musician father when he started working at some of the most elite French restaurants in the world. Abel fils reflects on his father and their relationship in Ben Proudfoot’s ultra-hip short documentary, That’s My Jazz, which screens during the 2019 Tribeca Film Festival.

Abel Senior played with all the real deal KC players. According to his son, he was asked to sing at Charlie Parker’s funeral. He definitely recorded with Jay McShann (as did Bird), so you know he was legit. His son used to fall asleep on the bandstand listening to his father (imagine the amazing music he snoozed through, but he just a young kid at the time).

In fact, the junior Abel clearly wishes he could rewind back to those times as well. As the title implies, the son considers culinary arts to be his creative outlet, like music was for his father. Maybe he did not explain that to his father as well as he could have, but he’s only human. In any event, it is nice to see Abel Senior get greater recognition, even if it is posthumous.

To that end, Proudfoot does everything totally right. The short doc incorporates some infectiously swinging music Abel played on, including the Kansas City Jazz Spectrum Ensemble’s recording of “Big Noise from Winnetka.” Whatever you do, don’t leave early, because the culinary-themed “Better than Anything,” featuring Abel and vocalist Sherry Jones, plays over the closing credits.

That’s My Jazz sounds great and it also looks terrific, thanks to David Bolen’s stylish black-and-white cinematography, which is aesthetically pleasing, but also nicely evokes vibe of Kansas City’s jazz heyday. It is a bittersweet film, but it swings and has soul. Highly recommended, That’s My Jazz screens again tomorrow (5/3) and Saturday (5/4), as part of the Shorts: On Tour program, at this year’s Tribeca.
Posted by J.B. at 2:00 PM