Norman Mineta and His Legacy: An American Story 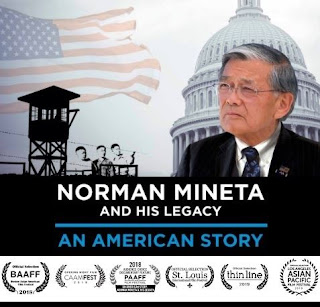 When the airport is named after you, do you still have to take your belt and shoes off when going through security? Norman Mineta would know (as in the Norman Y. Mineta San Jose International Airport), but he is probably a TSA Known Traveler anyway. The former Congressman, San Jose Mayor, and five-year Transportation Secretary (still the longest serving) is also one of the last American politicians with a history of bipartisan outreach, so it is fitting both sides of the aisle are represented in Dianne Fukami’s Norman Mineta and His Legacy: An American Story, which airs this Monday on participating PBS stations across the country.

Mineta was second generation Nisei Japanese-American, born to the first generation Issei Japanese-Americans, who were legally denied citizenship most of their lives. Quite logically, the Japanese internment casts a long shadow over the film, first when chronicling his experiences in the Heart Mountain camp outside Cody, Wyoming and then reporting his successful efforts to pass legislation officially apologizing and redressing the systemic relocation mandated by Roosevelt.

Ironically, that is also where the film starts to get bipartisan, because a young Alan Simpson, the future Wyoming senator, was a member of the only local Boy Scout troop that attended events at the camp. A fast friendship developed between the two scouts, which they continued as pen pals until reuniting in congress. Naturally, Simpson shepherded Mineta’s House legislation through the Senate (after which, Pres. Reagan signed it into law). It is just nice to see Mineta and Simpson appear together in the film, still carrying on like the old pals that they are.

Yet, probably the one politician who gets the most time in Mineta’s doc besides Mineta himself is Pres. George W. Bush, who appointed him Secretary of Transportation, even though Mineta is a Democrat. We also hear from Clinton, who tapped him to fill a short vacancy at the Commerce Department, but Bush has much more interesting things to say (regarding September 11th and bipartisanship).

Legacy is a conventional, straight-over-the-plate documentary, but it has an inclusive spirit and significant talking heads. (Look for former Rep. Dan Lungren for further Republican interest.) Sadly, you will not find many members of Mineta’s party left in Congress who can have a civil conversation with Republicans (and vice versa).

Indeed, there is a lot to learn from Mineta. Rather tellingly, he does not simply frame the Japanese internment policy as a stain on the national character. He also points to it as a rare example when a country admitted its mistakes and sought to make amends. It’s a good point. Recommended as one of the increasingly rare political documentaries with a positive message, Norman Mineta and His Legacy screens this Monday (5/20) on PBS outlets, including WNET in the Tri-State Area, and Tuesday and Wednesday (5/21 & 5/22) on the World Channel.
Posted by J.B. at 6:00 AM