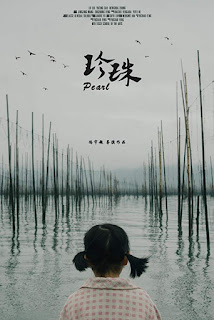 Growing up is never easy. Growing up as a young girl in provincial China often piles on additional degrees of difficulty that just aren't fair. Six-year old Lin will learn confront this hard reality in Yuchao "Robbin" Feng's short film Pearl, which premiered during the 2019 Tribeca Film Festival.

Lin is a somewhat naughty little girl. That just goes with her age, but on this fateful day, it will make it easier for her mother to make a decision that most of us will find unconscionable. We understand what is happening when she take little Lin with her, to teach her how to shuck oysters, in what amounts to her final act of mothering. However, Lin remains heart-rendingly oblivious.

Even astute viewers will understand what is going on every step of the way, Pearl still lands with brutal emotional force. The closing scene evokes some of the great scenes in cinema history, while also capturing the reality of life for China's marginalized underclass (especially the girls) with full force.

Yating Cao is a complete natural and utterly devastating as the little girl. It is impossible not to feel for her. Yet, Lu Liu probably pulls off a trickier role as the mother. As disturbing as her decision might be, viewers will understander her, rather than demonize.

Executed with great sensitivity, Pearl is a haunting piece of short cinema that should have a long life on the festival circuit. Previous films, like Chloe Zhao's Daughters have addressed these themes before, but Feng makes them fresh and potent here. Highly recommended, Pearl should come back around for some of the upcoming Asian film festivals, after premiering at this year's Tribeca.