El Presidente: The Inside Shenanigans of FIFA-Gate 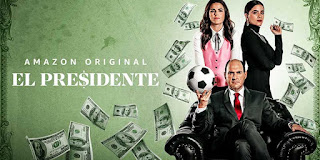 FIFA is headquartered in Zurich, the home of secret Swiss bank accounts. It is not a coincidence. The international football federation has been remarkably rapacious and it can now be said without an “alleged” qualifier, deeply corrupt. In a case of spectacularly bad timing, FIFA’s self-funded vanity film United Passions released just when the FBI and Swiss police arrested many high-level FIFA officials and associates, who subsequently cut plea deals. It is doubtful FIFA provided much support for this wickedly funny limited series chronicling the corruption investigation. Sergio Jadue, the President of the Chilean Football association and reluctant FBI informant becomes unlikely power-broker, who witnesses the implosion first-hand in Armando Bo’s El Presidente, which premieres today on Amazon Prime.

Jadue’s rise is truly precipitous. His provincial club only just clawed its way back to the A level. Nobody really knew who the ambitious club executive was when he showed up at the ANFP (Chilean FIFA affiliate) meeting, but they elected him president assuming he would be a compliant bench-warmer for their preferred but unavailable choice. Obviously, they had not met his wife, Nene.

Thanks to her prodding and his plodding, Jadue assumes his rightful place in the inner circle of Conmebol, the South American governing body for international football. He is also encouraged by Rosario, the mysterious bartender in the hotel where they meet in Luque, Paraguay, solely because the government grants them diplomatic immunity. The longtime Argentine President and FIFA international VP Julio Grondona rather appreciates Jadue’s moxy—so much so, he provides the series’ ironic narration from beyond the grave.

Despite Grondona’s sage advice and his relative inexperience, Jadue chases greater power and influence within FIFA. His ambition and greed are also vulnerabilities FBI Agent Lisa Harris will exploit. Jadue knows her under her assumed identity of Rosario, but she is really the South American field coordinator for the FBI’s FIFA-gate operation.

In terms of tone, El Presidente is somewhere between the Brazilian political corruption drama The Mechanism and Steven Soderbergh’s satirical The Laundromat. There are a number of truly ridiculous moments in Bo’s series, all of which are true (well, maybe sometimes exaggerated just a tad). Honestly, Jadue’s exploits and misadventures are so outrageous, they have to be presented with knowing laughter.

Andres Parra has already played Pablo Escobar (twice) and Hugo Chavez, so Jadue makes a fitting hat trick of infamy (that’s a hockey reference, it’s like football with more ice and fighting). It is a brilliant comedic performance that only starts with his dead-ringer likeness to Jadue. He fully and relentlessly portrays the Conmebor exec’s shameless corruption, yet he still projects a weird naivety. He is nakedly venal, but his indomitable plugger spirit almost wins over viewer sympathies.

Yet, somehow, Paulina Gaitan often out-shines and over-powers Parra’s Jadue as Nene, his Lady Macbeth. There are times when she storms into scenes with the force of a hurricane. Karla Souza plays Rosraio/Agent Harris cutting sarcasm and punky, rebellious attitude you rarely see in FBI Agents, but it makes her verbal jousting with Jadue quite amusing to watch. However, Luis Margani probably gets the biggest laughs as the literally above-it-all Grondona, who could be the drollest narrator since Sam Elliott’s “The Stranger” gave us the low-down in The Big Lebowski.

Take that United Passions. Bo, who previously wrote Birdman and Biutiful, has devised an unusually rambunctious epic of corruption both large and small. Nobody remotely connected to the FIFA swamp escapes unscathed, most definitely including their pursuers in the FBI. This really is a scathing indictment, yet it is bingeably fun to watch. Very highly recommended, El Presidente premieres today (6/4), on Amazon.
Posted by J.B. at 6:00 AM