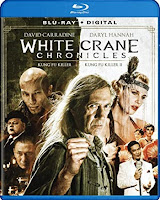 He walked the earth “like Caine from Kung Fu,” but he eventually returned to his Wudang monastery to find peace in his later years. Unfortunately, the violence of the outside world will give him no respite. His name is Crane, not Caine and this time the late David Carradine was not pretending to be anything but caucasian, but there was definitely a lot of winking and nodding going on towards his 1970s television show. Regardless, the fight direction and production values were definitely a cut above average in The White Crane Chronicles (a.k.a. Kung Fu Killer parts I & II, a two-part miniseries (also considered two be a back-door pilot that did not get a full series pick-up), which releases this Tuesday on BluRay, from Mill Creek Entertainment.

After Crane’s missionary parents were murdered, Myling, the grand abbess of the monastery, took in the young white waif. Of course, he thrived under her instruction, but felt compelled to leave, for reasons that will be partially explained in the second installment. Regardless, his tranquil golden years hiatus will be short lived when the soldiers and thugs hired by the Warlord Khan gun down most of the Wudang monks and students, including Myling. Only White Crane and his student Lang Han survive.

Despite Myling’s dying words, Crane ventures back to 1920s Republican Shanghai in search of vengeance, leaving Lang Han to look after the villagers who had been protected by the Wudang monks. Once there, he quickly befriends Jane Marshall, an American torch singer performing in the night club managed by her sort-of-lover, Bingo Quo. Khan is her biggest fan and would be patron, but he also happens to be holding her opium-addicted brother Peter Marshall (just try not to think of the Hollywood Squares whenever you hear his name) captive, forcing him to mix a particularly lethal concoction of poison gas to fuel his ambitions of Chinese conquest and unification.

Things will be mostly resolved at the end of part one, but Bai, a briefly seen bitter rival from Crane’s past reappears in the concluding segment. In fact, part two feature some of the best fight sequences, thanks to the skills and action cred of Anya Wu, who is terrific as the villainous Bai’s chief lieutenant. The bald and scarred Bai, as played by Lim Yu-Beng is also a worthy opponent for White Crane.

Indeed, there are a number of terrific fight sequences choreographed by Cai Li (whose work includes Hero and House of Flying Daggers). He wisely tailors the moves for Carradine, who was then in his early seventies, but still looked relatively credible (words cannot express the superiority of White Crane over Son of the Dragon, another Carradine miniseries filmed in China two years earlier).

Osric Chau and Rosalind Pho also hold up their action duties quite nicely as Lang Han and his girlfriend Wei. Unfortunately, there is no getting around the miscasting of Daryl Hannah, whose weak cracking voice has no business on any night club stage. However, the all-too-short but significant appearance of legendary Shaw Brothers martial arts star Cheng Pei-pei makes up for the missteps.

Okay, nobody will ever mistake White Crane Chronicles for A Touch of Zen, but it is still a lot of fun. It settles into a solid groove whenever the fists and feet are flailing and flying. Arguably, it also represents thoughtful and rather sly way to take stock of Carradine’s martial arts legacy (yes, he even plays the flute). Recommended for fans of the star and the genre, White Crane Chronicle releases this Tuesday (6/9) on BluRay, from Mill Creek Entertainment (and it can be found on several apps).
Posted by J.B. at 6:00 AM