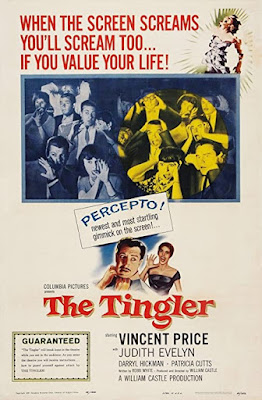 Like a pool hustler carrying his own cue, Vincent Price should have had his own specially tailored lab coat. Usually, he portrayed mad doctors conducting evil experiments. However, Dr. Warren Chapin is a more ambiguous researcher, who is working on some real science. It is crazy, but his discovery, a parasitic creature brought out by fear, nicely complimented showman-director William Castle’s “Percepto” gimmick. Scream for your life Castle advises viewers in his signature campy introduction to The Tingler, which airs Friday night on TCM.

Fear is Dr. Chapin’s specialty, as he explains to nebbish Ollie Higgins, who is exercising his court-mandated right to observe the autopsy of his freshly executed brother-in-law. It turns out his homicidal brother really died of fright from the anticipated voltage of the electric chair. That gets Chapin to thinking about his own emerging theories regarding the physical effects of fear.

When he scares the wits out of his unfaithful wife Isabel, he manages to x-ray the centipede-like “Tingler” on her spine. After conducting a sort of controlled experiment on himself, by dropping acid, Chapin develops a hypothesis that Tinglers feed off human fear, until the noise of their hosts’ screams forces them to break contact. That’s the theory, but what happens when someone can’t scream, like Higgins’ deaf-mute wife, Martha?

The Tingler is notorious for Castle’s Percepto stunt. According to urban legend, he rigged select theater seats to give patrons electric shocks, but other sources say he merely hooked them up to buzzers. He also hired fainting shills and posted phony nurses in theater lobbies. In fact, The Tingler is probably more responsible for Castle’s huckster reputation than any other film.

Yet, the film never really gets credit for a pretty original concept. Frankly, Castle was arguably punching above his weight with his rather distinctive and even stylish execution. Dr. Chapin’s acid trip nightmare is creepy, but Martha Higgins’ freak-out sequence is truly surreal and sinister, inventively integrating the bright crimson red color of blood into the film’s shadowy black-and-white (despite his shticky rep, Castle was quite familiar with European art cinema and you can see the influence here).

Plus, Robb White’s screenplay pulls of some surprisingly clever misdirection. Admittedly, the dark sequences in which Price warns the audience to scream their lungs out because the Tingler is loose in their theater (or drive-in, according to alternate version) are definitely Castle-corny, but that is all part of the film’s charm.

Regardless, the real reason to watch The Tingler is Vincent Price, of course. He is as smooth as usual, playing Dr. Chapin, but his portrayal is particularly intriguing for its combination of high-handed hubris and a rather humanizing concern for his younger step-sister Lucy Stevens and his lab assistant, her fiancé, Dave Morris. Patricia Cutts (who was quite a tragic figure in real life, dying after appearing in the first two episodes of the long-running Coronation Street) cranks up the camp, by vamping it up as the spiteful Mrs. Chapin. Yet, Philip Coolidge stand out for his restrained and nuanced turn as the sad-eyed Higgins (some of the best work you’ll find in a William Castle production that isn’t Rosemary’s Baby).

Honestly, The Tingler really ought to be on the National Film Registry. Castle’s promotional campaign for the film contributed greatly to his larger than life persona, which directly inspired Joe Dante’s lovingly nostalgic Matinee. It is also directly referenced in the title of Jeffrey Schwarz’s entertaining bio-documentary, The Spine Tingler. Plus, the film has Vincent Price rocking a lab coat and generally doing what he did best. Highly recommended for fans of Price and Castle, The Tingler airs Friday night (10/23) on TCM and it is also available on the Tubi app.
Posted by J.B. at 6:00 AM