Josephine Baker: The Story of an Awakening, on Cinemoi 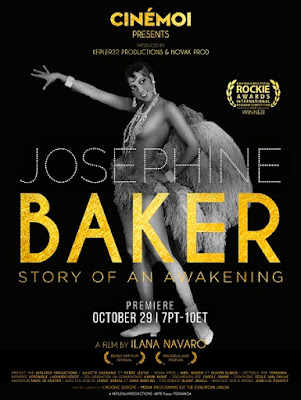 She became a fashion icon by notoriously wearing very little. She was the toast of Paris, who returned the city’s love by joining the French resistance. For her service, she was awarded the French Croix de Guerre, along with Vera Atkins and Noor Inayat Khan (posthumously), the subjects of A Call to Spy. Rather fittingly, Ilana Navaro’s Josephine Baker: The Story of an Awakening premieres this Thursday on Cinémoi, the film and fashion network.

Baker grew up in Missouri, a Union border state that felt more like the Old South, around the time Woodrow Wilson segregated the Federal government. She broke into show business in the storied Cotton Club, clawing her way from a back stage gig to a featured spot in the chorus. However, it was Paris, where Baker became a star. Yet, she was constantly frustrated in her attempts to expand her French popularity with American audiences.

Baker passed away in 1975 and achieved her career peaks in the 1920s and 1930s, so none of her contemporaries are really around anymore. As a result, there is a conspicuous but unavoidable lack of personal voices in Awakening. Instead, Navaro relies on a handful of talking head academics, who provide competent commentary, but nobody really gives a sense of Baker, beyond the legend.

Of course, that is really what Navaro’s hour-long documentary is most concerned with. Even more than the Parisian night club icon, Awakening examines Baker as a symbol of French resistance and Civil Rights activism. To a large extent, Awakening is more about how others perceived Baker than her personal relationships. Arguably, her “Rainbow Tribe” adoption of twelve children from around the world made her an early forerunner to Angelina Jolie, but there had to be more drama and complications involved than Awakening lets on.

Navaro probably gives more time to Baker’s civil rights activism than any other aspect of her life, which is certainly a logical and defensible editorial decision. However, we suspect a lot of intrigued viewers would like to hear more about her clandestine work for the French resistance. Indeed, “Josephine Baker, Secret Agent,” sounds like a winning premise for TV mini-series or film, very much in the tradition of Call to Spy (which deserved considerably more attention and acclaim).

Still, it is a probably a good sign that Awakening leaves us wanting more Josephine Baker. It is a solidly informative overview of her life and career, with plenty of striking archival images. There is little new here that will be particularly new or surprising to hip viewers who have already seen previous Baker docs, like Josephine Baker: Black Diva in a White Man’s World, but it should fascinate Cinémoi’s established audience. Recommended as a compact biography of an amazing life, Josephine Baker: The Story of an Awakening airs Thursday night (10/29) on Cinémoi.
Posted by J.B. at 6:00 AM