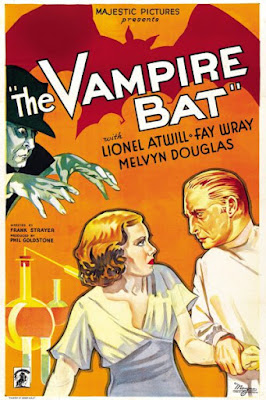 It is hard to say whether superstition or science is a more destructive force for this Old European village. Of course, we are not talking about mere conventional science. Dr. Otto von Niemann practices mad science. However, he shrewdly exploits the traditional vampire legends to explain away all the bodies he has drained of blood in Frank R. Strayer’s The Vampire Bat, which was recently restored by the UCLA Film & Television Archive, who held a special streaming screening last night (and it also airs this afternoon on TCM, presumably from a standard, older print).

Dr. von Niemann is played by Lionel Atwill, so we know he is up to no good in his laboratory, but somehow his assistant and lodger, Ruth Bertin is oblivious to his villainy. She is romantically involved with Inspector Karl Breettschneider, who has been bedeviled by a rash of murder victims completely drained of blood. He initially thinks all the vampire talk is rubbish, but Dr. von Niemann gives it convincing credence.

Unfortunately, suspicion soon falls on poor Herman Glieb, the town freak, who keeps bats as pets in his garret (you could say they are in his belfry). He also has a habit of turning up at the wrong place, at the wrong time.

Vampire Bat is the sort of production Roger Corman could respect. It was produced by a “Poverty Row” indie studio, but it approximated the look and vibe of the blockbuster Universal monster movies by repurposing hand-me-down sets from Frankenstein and Old Dark House. It also hired thesps who were (or would be) associated with the Universal franchises. For instance, Lionel Belmore, who played the Burgomaster in Frankenstein, plays Gustave Schoen, the Bergermeister (a totally different role).

More importantly, Dwight Frye (Fritz in Frankenstein and Renfield in Dracula) gives arguably his finest performance as the nutty yet acutely tragic Glieb. He raves, rolls his eyes, and does what he did best, but in a way that subverts and deconstructs his famous roles. Atwill (who would become iconic as the Inspector with the wooden arm in Son of Frankenstein) makes a coolly cerebral mad scientist, but he still chews plenty of scenery as von Niemann.

This was definitely a “scream queen” job for Fay Wray, but she plays Bertin with a bit more attitude and forcefulness then we usually get from pre-Code horror damsels in distress (as she also did in The Most Dangerous Game. She also has some nice flirty chemistry with Melvyn Douglas (fresh off Old Dark House), who is amusingly flamboyant and sarcastic, also providing a nice contrast to the standard bland horror leading men.

Ira Morgan’s black-and-white cinematography looks great after the UCLA restoration. What really makes it special though, is the dramatic uses of spot-color, originally hand-painted by artist Gustav Brock that were not seen since the film’s release. The bright yellow of the flickering torches carried by the villagers as the hound the innocent Glieb are actually quite a dramatic effect that almost re-centers the film around Frye, positioning him as a martyr-hero.

On the other hand, the story remains a slapped together mish-mash (why does everyone seem to live in von Niemann’s villa?) and Bertin’s hypochondriac Aunt Gussie would still be annoying, even if they added strobe lights to her scenes. This is undeniably a creaky old chestnut, but it is fun nostalgia piece. It also offers a chance to see three early genre stars, Wray, Frye, and Atwill, together in the same picture. Recommended as atmospheric Halloween viewing (especially the UCLA restoration), The Vampire Bat airs this afternoon (10/30) on TCM (and it streams on Prime).
Posted by J.B. at 6:00 AM