BHFF ’19: A Night of Horror—Nightmare Radio

When it comes to horror movie radio personalities, Rod Wilson cannot compete with Adrienne Barbeau in The Fog, but who can? The important thing is he connects with his listeners and he can tell a spooky yarn with the best of them (maybe not John Houseman in The Fog, but he is still pretty good). In fact, his framing sequences are the best part of the Onetti Brothers’ anthology film, A Night of Horror: Nightmare Radio, which had its North American premiere at this year’s Brooklyn Horror Film Festival.

Wilson produces his own overnight show, so it is just him and a cup of coffee in his converted ranch house studio. Ordinarily, that suits him fine, but tonight he gets a little spooked by a series of crank calls. Obviously, the best way to settle his nerves will be telling his audience the scariest tales he can spin. However, there is very little consistency to his stories, both in terms of theme and quality.

Instead of commissioning new segments, the Onettis just parked pre-existing short films within their anthology framework, so it is not impossible horror fans could have seen some of these before. It starts with one of the more aesthetically challenging, Jason Bognacki’s In the Dark, Dark Woods, which is even less conventional than his head-spinning doppelganger feature, The Mark of the Witch. Arguably, Joshua Long’s Post Mortem Mary is the most traditional, but he wrings plenty of creepiness out of the macabre premise involving a young girl working as a post-mortem photography assistant in frontier Australia.

Probably the best shorts, A.J. Briones’ The Smiling Man and Oliver Park’s Vicious would be tricky for Wilson to actually relate over the air, because they are largely dependent on freaky things seen out of the corner of our eyes or in reflections. Regardless, they are easily the tensest, most effective constituent films in the anthology. 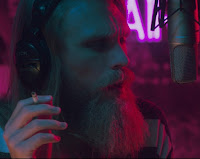 On the other hand, Matthew Richards’ The Disappearance of Willie Bingham is easily the most polemical, but it is still well worth seeing for Gregory J. Fryer’s performance as a world-weary civil servant presiding over the systematic amputations of a convicted sex criminal-murderer. Of course, something has to be the worst, which in this case would probably be A Little Off the Top, a hairdresser horror story with a grisly ending that you’ve probably already guessed.

Night of Horror: Nightmare Radio needs a tighter title as well as tighter quality control. As an anthology, it is just all over the place. However, James Wright impresses tremendously as Wilson. It is easy to envision him becoming a genre stalwart based on his work here. Like a mixed bag full of mixed bags, Night produces highly mixed reactions, but the good parts are very good. Probably worth waiting for Shudder or Netflix, Night of Horror screened during the 2019 Brooklyn Horror Film Festival.
Posted by J.B. at 3:00 AM