Sundance ’21: Marvelous and the Black Hole 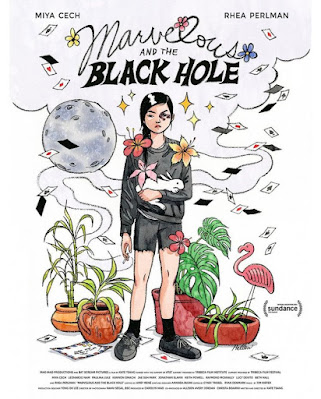 Magic isn’t just for casino acts and annoying Harry Potter movies anymore. It might just help sad and angry Sammy Ko get through her super-awkward teen years. She still grieves her mother and has no use for a prospective step-mother, but her unexpected mentor Margot the magician might just have some construct life lessons for her, beyond mere sleight of hand, in Kate Tsang’s Marvelous and the Black Hole, which premiered as part of the 2021 Sundance Film Festival.

Life is difficult for Ko, both at school and at home. She dearly misses her late mother and it upsets her that her father and older sister have already gotten over it. Of course, they haven’t really. They just don’t show it as much, but Ko can’t see that yet. After nearly getting expelled, her father delivers an ultimatum. Enroll in summer community college classes or get shipped off to a tough love boot camp. Ko reluctantly opts for a business class.

It is there that Ko meets Margot, on her way to a gig at the campus daycare center. Margot has a special affinity for children. It turns out she also has a knack for reaching troubled thirteen-year-olds as well. Initially, Ko thinks she is too cool for kiddie magic, but she needs to shadow a small business-owner for her project, so it becomes Margot by default. Yet, Margot’s tart attitude and skillful illusions start to impress the confused kid (her rabbit Sebastian also helps). Unfortunately, news of her father’s engagement to Marianne Revell (who makes the classic mistake of trying too hard) renews all her angsty resentment.

Admittedly, Tsang’s narrative is about as predictable as the New York Jets losing another game.  However, Tsang’s visual sensibility makes it all feel fresh again. She incorporates brief spot animation and flights of magical fantasy that add a lot of razzle dazzle. Stylistically, it comes from a similar place as This Beautiful Fantastic, but with more emphasis on the fantastical. It moments of beauty are also more beautiful, especially Tsang’s striking representation of the Chinese fable of the Empress and the Moon Rabbit.

The people in Marvelous are pretty good too. Rhea Perlman has worked steadily since Cheers, but Margot is a perfect showcase for her endearingly sarcastic talents. Margot also eventually turns out to be a more interesting character than we expect, who has tragic roots in the Hungarian Revolution of 1956.

Miya Cech is surprisingly young to a carry a film like this. Frankly, she looks younger than thirteen, but her anger and teen snottiness are spot-on. She is often a hard kid to embrace, but we can totally buy into her. In contrast, we feel acutely for Leonardo Lam, playing her father Angus with quiet, understated poignancy. Keith Powell and Jonathan Slavin also supply some nice comedic support as Ko’s business instructor and Puck, Margot’s magician crony, respectively.

Marvelous has a lot of respect for magicians and the practice of magic. Tsang recruited working stage illusionists as technical advisors and cast several working magicians as Margot’s colleagues. Honestly, it is nice to see a film about magicians that isn’t a horror movie. It is a definitely a manipulative tearjerker, but it is still a sweet film that just works. Recommended for fans of stage magic and coming-of-age movies, Marvelous and the Black Hole screens again tomorrow (2/2) during this year’s mostly online Sundance.
Posted by J.B. at 2:00 AM